Keep using advice instead of advise? Check out this Grammar.com article and make sure you never confuse the two again!

This pair of homophones (pair of words that have similar sound but different meaning and spellings) is very commonly mistaken by people while writing. Both of the words have somewhat same meaning but they are different parts of speech when used in a sentence; one is a noun while the other one is a verb.

He advised me not to give advice to others.

Advice, plural advices, is only used as a noun in English language where it mostly means guidance or suggestion offered by someone with regard to a prudent action. Originated from Latin and Old French, it can be substituted by words like counsel, help, instruct and direct. When you give someone a suggestion it is advice but when you suggest someone about something it is NOT advice, but advise.

The police inspector gave us advice not to pursue the case any further.

One more usage of advice is the formal notice given for a financial transaction or contract. This is a less common meaning.

The company issued remittance advices to all the clients.

Advise with an s is employed as a verb in English language. Having the same origin as advice, advise used in 3rd person present is advises, in past tense is advised, in past participle is advised and in present participle is advising. The most widely used meaning of advise is to offer suggestion or recommendation to someone about the best course of action according to your understanding.

I advised him not to get involved in their business.

Note that advise is used as a verb and it describes the action of the person i.e. suggestion to not get involved. If the example was “I gave him advice not to get involved” then we would have used advice with a c. 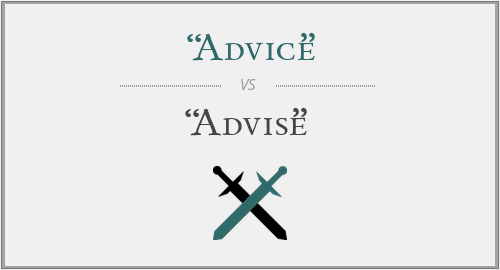 Another way of using advise is to recommend someone of something. With synonyms like advocate, suggest, recommend, commend and encourage, advise is sometimes engaged in sentences where it implies this meaning.

One formal definition of advise is to inform a person about a statistic or fact that he/she was unaware of in an official way. This definition also uses advise as a verb and represents the act of updating someone about an official event.

“You will be advised of the further course of action,” the director instructed his team.

This example could have used words like informed, notified, given notice, apprised or briefed instead of advised and still make sense.

So next time you are writing a paper and the word advice or advise has to be used just make up your mind if you want to use it as a verb or a noun first, then you go on and write advice for noun and advise for verb. Make sure you understand that these two words cannot be interchanged for each other. The synonyms of these words however, can be used for either advice or advise, by addition of some assisting words like give, for or to. Note the example below:

The pair can be used in the same sentence for same meaning but in a different way.