Anyone vs. Any one

This Grammar.com article is about Anyone vs. Any one — enjoy your reading!

Have you ever wondered what the difference is between anyone and any one?

Consider the sentences below;

If any one of your friends knows, please tell them to keep quiet.

Has anyone seen my wallet?

Both of these sentences have used the words anyone and any one correctly, question is can you use them correctly? If you can’t figure out when to use which of these, keep reading as this article will tell you everything about the two words.

Anyone is a pronoun and is used to call upon a noun. It means any person at all; anybody:

Did anyone see the accident?

Anyone as a pronoun meaning “anybody” or “any person at all” is written as one word. It is used when there are no qualifications to the grouping. Something could belong to anyone if there are no distinguishing marks or unique factors.

Does anyone have the correct time?

Any one as adjective phrase: 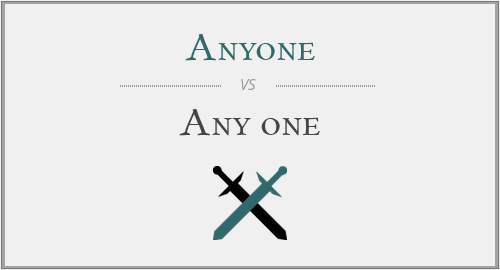 Any one is a combination of two words which is generally not listed in dictionaries except perhaps to distinguish the differences with anyone. Any one is a term that means any single object or person.

Any one of your buddies, if he's careless enough, could turn out to be your enemy.

Adjective phrase that refers to any single member of a group (of either people or things). Any one is commonly followed by the preposition of.

She never admitted that any one of her pupils, even the ones who were unmistakably tone deaf, were deficient in musical talent.

Anyone willing to part with between £20,000 and £200,000 for a week’s holiday can live in the homes of the rich and famous while they are away, order their staff around, and make use of their cars, tennis courts and swimming pools. [The Guardian]

Impressively, everything is available to tweak and tune if you so desire from the very start but the stock settings on each car are good enough to get you around any one of the current 110 track variations. [Scottish Daily Record]

In the United States, spiritual mobilization has long been anyone’s game. [The New York Times]

Anyone or any one: