This Grammar.com article is about Dairy vs. Diary — enjoy your reading!

Simply inverting the order of two letters in a word can completely change its meaning. This is exactly the situation for "dairy" and "diary", which are two nouns spelled very similarly. This similarity is also the one that causes confusion, because people often replace them, either due to a mistake or to an error of understanding.

So let's make it clear what each word represents and how to use it correctly so that you won't be tricked again or tempted to invert the order of the letters.

Strictly referring to parts of speech, there is a difference from this point of view too, between "dairy" and "diary". Apart from their significance, "dairy" and "diary" also differ through the number of parts of speech they can be used as.
"Dairy" can be used both as a noun and as an adjective, with a similar sense. "Diary", on the other hand, can only be used as a noun, having a completely different definition than "dairy".

As a noun, "dairy" is defined either as a place where milk is stored and prepared into products such as cheese, yogurt, butter or cream or, as a secondary sense, as a company that sells these type of products obtained from milk.

As mentioned above, "dairy" can also be used as an adjective. In this case, the word can only be used before a noun, describing a product's provenience or relation to milk.

Example 1: The cream we sell is prepared only in our own dairy, which is sanitized every 12 hours for optimum hygiene. - a noun referring to the place where products are prepared from milk.

Example 2: We have so many cows and goats that we decided to run our own bio dairy; it turned our more successful than we expected. - "dairy" as a noun can also define a company that sells milk and products derived from it.

Example 3: We are vegetarians and never consume dairy products. - as an adjective, "dairy" is always placed before a noun and refers to products prepared from milk.

Unlike "dairy", "diary" can only be used as a noun, defined as a notebook containing empty pages or spaces for each day of the month/year, where its owner writes daily thoughts/feelings/experiences etc. "Diary" can be a great synonym for "journal".

Example: Not having a friend to talk to about her problems, she decided to keep a diary in order to free her emotions. - "diary" is a noun defined as a book where personal experience are written on a regular basis.

Never confuse "dairy" for "diary". Even though they are both correct and spelled similarly, they represent different things and must not be replaced one with the other. "Dairy" is related to milk products, as defined above, while "diary" is related to daily writing experiences in a personal notebook. 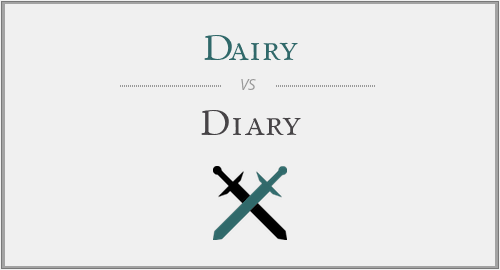