In this Grammar.com article you will learn the differences between Historic and Historical.

The words historical and historic were synonymous to each other back in the 18th century meaning something that belonged to or is representative of the past. Historic was used as a shortened form of historical but the difference between the two started diverging over time. In the early 19th century, the difference between the two had solidified and so did the confusion and misinterpretation of both the words. People confused one for the other, or used both in the same context as before. Now a days, the distinction between historical and historic is well established and strike the experts if any one of the word is used wrongly.

The historic figure of Mother Teresa is evident of the historical personalities.

Historical was derived from Greek historikos meaning past and is used as an adjective in English language to describe the nouns. When someone or something is concerned with past events or history, that person or thing is historic. The historical evidence indicates a civilization in this place. The term historical is also describe to imply a belonging of something to the past. The famous historical figures are very valuable. The study of a subject that is based on an analysis of its development over a period of time is called historical.

For the Darwinians, biogeography became a historical science.

Something or someone of very much importance in the past or potentially so. The area’s numerous historic sites are a sight for the eyes. Something which is concerned with the history or the past.

Volcanic eruptions in the historic times were not as vigorous as of today. 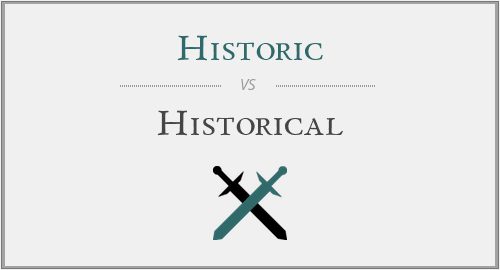 Historical fiction is currently enjoying a tremendous renaissance, both in terms of literary and commercial recognition. (Guardian)

Optimism that stock prices will rise over the next six months remained below its historical average of 39% for the second consecutive week. (Forbes)

When we cut to the USS Arizona “a few minutes after eight”, the historical footage creates a narrative that is genuinely chilling. (Sydney Morning Herald)

Early morning parties were held across the city to mark the historic event. (CTV.ca)

That’s in addition to historic droughts and fires in Texas, record low temperatures in Seattle, and snow and flooding in the Midwest. (NPR)

Is the civil war a historic or historical event?