This Grammar.com article is about Homogenous vs. Homogeneous — enjoy your reading!

If you haven’t yet figured out what’s different in both the words, it is just the extra ‘e’. Yet, there is no similarity in the meaning of homogenous and homogeneous.

In this Grammar.com article, let us understand some important differences with appropriate examples for each of the words.

During our chemistry lessons at school, we encountered this word more than often – “two substances having homogeneous characteristics…. “

The word means similar or uniform. Two things, persons or places having similar characteristics are referred to as homogeneous. The opposite (antonym) word of homogeneous is heterogeneous.

Homogeneous is an adjective and finds it roots from the Greek homos (same) + genos (kind). The word found wide usage starting from the 1960s. It is pronounced as ho-mo-jeen-i-yes and has 5 syllables in total.

Some common examples of usage –


Homogeneous mixture – If a mixture has more than one component which cannot be separately identified by seeing the mixture, it is called as a homogenous mixture. For example, cake batter, chocolate syrup, milk, tea etc…

Homogeneous group – A group (in an educational setting) having students with similar instructional levels, so that they can work on the areas of their strength and interests. They are also called as ability-level groups.

Well, if you dint know this word – just don’t learn it – it is obsolete anyway. But if you have heard or read about it somewhere, let me tell you that it was used until the 19 th century to talk about biological or genetic similarity. The new term used for this purpose is homologous.

Homogenous has its roots from the English homo (same) + genos (race or kind) + ous. It is pronounced as ho-mah-je-nus with 4 syllables. Here are examples of possible earlier usage,

However, we would recommend you to not use the word. Just stick to homogeneous with the extra ‘e’.

Earlier, homogenous was used as a scientific term, mainly in biology, but now it is almost obsolete, being replaced by homologous. Whereas, homogeneous is a common word, very much in use and means having similar or comparable characteristics. 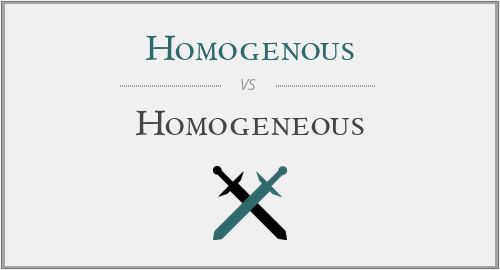