This Grammar.com article is about Illusion vs. Delusion — enjoy your reading!

Illusion" and "delusion" are spelled quite similarly and also used in similar contexts. But can they replace one another and can they be called synonyms right away, or are there some significant differences between them that you should keep in mind?

Let's discuss the subtle differences between "illusion" and "delusion", as well as the definitions given by notorious dictionaries for these words, in order to confirm once and forever whether you can use them or not with the same purpose, without creating confusions or misspellings.

Both "illusion" and "delusion" are nouns, countable or uncountable according to the situation in which they are used. They both define some ideas that are not real but which are believed by somebody.

Even though, from this perspective, you might call "illusion" a synonym for "delusion", the explanations offered by dictionaries illustrate some subtle differences between these words. It is important that you understand them, because they are the source of identifying in which context you have to use "illusion", and where "delusion" is more appropriate.

When do we use "illusion"?

Unlike "delusion", which has one single meaning, "illusion" is used in more situations, with a secondary sense as well. Firstly, it is defined as an idea that is not true, but secondly, it can also refer to a concept, an object or an image that is not really what it appears to be. See the examples below to get a better understanding:

Example 1: Stop believing in the illusion that you run this place - you are no longer its owner. - "illusion" defines an idea, an impression that is not true.

Example 2: The optical illusion created by this mirror is really interesting - it makes you look so much thinner! - as a secondary sense, "illusion" can also define the tricky nature of an object, the way something is not what it seems to be.

When do we use "delusion"?

Example: He still lives under the delusion that he owns this place. - "delusion" is the false idea that somebody has upon the reality.

Yes, "illusion" and "delusion" have very similar meanings, generally referring to the same misconception of the reality. Even so, there is a subtle difference in their meanings which you have to keep in mind before using these words, in order to demonstrate elegance in using English and in expressing your message correctly and fluently. 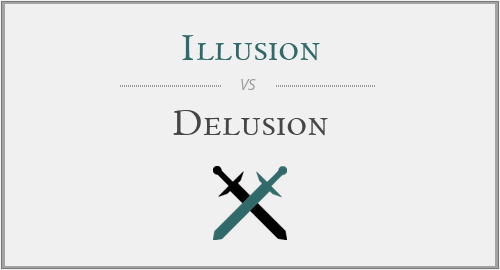