In this Grammar.com article you will learn the differences between Immigrate and Emigrate.

Alan emigrated from America and immigrated to Australia.

The above sentence might be a little confusing for you as the two words which you thought had the same meaning imply differently. The words immigrate and emigrate are very much related to each other and have almost similar meanings which elicit confusion in amateur writers. We are here to eliminate this confusion by explaining you the meanings of each of these words with examples, so you can understand the difference among the two and never confuse one for the other again.

When someone plans to go live permanently in a foreign country, other than one’s homeland, he/she is planning to immigrate. Going and living in another country after all the legal workings is known as immigration.

Samuel immigrated to Brazil in 1997.

In the above example, Samuel left his homeland to live permanently in Brazil so he immigrated to Brazil.

When someone plans to leave his country in order to live somewhere else in the world, he/she is planning to emigrate their country. Leaving your own homeland, where one is born, with the intention of living in a foreign country is known as emigration.

In the above example, the subject’s parents left Mexico, their homeland last summer in order to live somewhere else legally.

The distinction of the words extends to all of their derivatives, including emigrant, immigrant, emigrate, immigrate, emigration, and immigration. The em words have to do with leaving, and the imm words have to do with entering. The difference between emigrant and immigrant relates to the point of view of which country is the country of origin and which is the destination country. 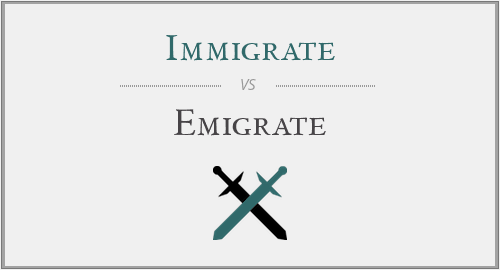 People are always saying there's no quality of life in Russia, and everyone wants to emigrate," he said. (New York Times)

Citizens from 17 European Union countries were given freedom to immigrate to Switzerland in 2007. (Business Week)

Are you planning to emigrate your country to immigrate somewhere else?