This Grammar.com article is about Knit vs. Knitted — enjoy your reading!

Seeing a verb spelled the same in present tense, past tense and future as well can only reflect that it’s an uninflected, irregular verb. This means it never changes its form, no matter what tense it’s used in. This is also the pattern followed by verbs such as “cut”, “bid”, “put”, “cost” etc. So knowing that “knit” is a verb that applies this rule, and then seeing it spelled “knitted” in past perfect or other past tenses can be really confusing, right?

So which one is a misspelling? Is “knit” regular or irregular? Find all these answer and more explanations to clarify any doubt about “knit” vs. “knitted” in this article!

“Knit” is an irregular verb, defining the action of making clothes using wool which is joined into rows using a special tool made out of two long needles. Especially in US English, speakers will frequently prefer to consider “knit” is irregular and to use the same form for present, past and future, given that it’s more comfortable and easy to remember and use a shorter form.

But at the same time, the spelling of the word as if it would be a regular one is also accepted. So officially and especially in UK English, “knitted” is just as correct as “knit” in past tense, both in past simple and in past participle. Formed by adding “-ed” after doubling the last consonant, “knitted” is equally frequently used in the English vocabulary as “knit” in past tense, and there is no restriction or context that requires the use of one or the other version. Both spellings are always correct and it’s simply a matter of personal choice.

“Knit” is the infinitive form of the verb, so first of all “knit” is used like this in present simple and future. And, as an irregular verb, it may keep the same form in past tenses, both past simple and past perfect. Therefore, you can use “knit” in all tenses.

Example 1: Don’t knit that wool, I need it for something else! – “knit” is the main form of the verb, used in infinitive and present simple.

Example 2: I will knit some beautiful, soft and warm pullovers for you and your sister! – “knit” keeps the same form for the future tense.

Example 3: I knit this a month ago, but still looks brand new! – “knit” is considered irregular and it’s used with the same spelling for past tense and past perfect, especially in US.

When do we use “knitted”?

“Knitted” is the form used for the past simple and past perfect tenses in English, when the verb is considered to be irregular. This spelling is mainly preferred in British English, though it’s equally correct and used in the same contexts as “knit”.
Example: I knitted this scarf for you a long time ago, but never had the chance to offer it to you until now. – “knitted” another spelling, officially accepted, correctly used in past simple and past perfect tenses.

You can use both “knit” and “knitted” when expressing a past tense (simple or perfect) for this verb, without worrying that any of them is a misspelling. Yes, US English prefers “knit” and British English prefers “knitted”, but there is no rule or restriction that would claim that one is better or more correct than the other. Choose the spelling you are most comfortable with and keep in mind both forms are correct and frequently used in the English vocabulary! 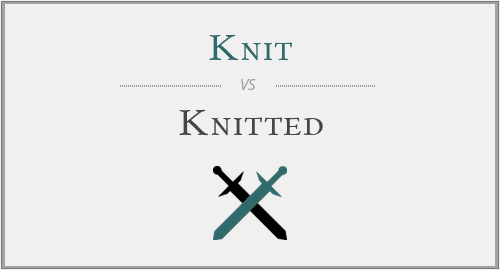