Here’s one of the grammar heavyweights that get confused way too often in the English language...yes, it’s “Of” vs. “Off”! Sometimes there are certain grammatical functions that cannot be explained to students of English in a logical, easy-to-remember way. "Of vs. Off" is one of those pairs of words that is a little bit more difficult to understand and remember.

It may be confusing and hard to know when to use "of" and when to use "off" in your writing. Frankly speaking, there is actually little you can do to logically understand these. You have to make sure you memorise these for good, and simply learn by heart every expression that uses "of" and every expression that uses "off" in order to correctly use them in your own sentences.

So, without further adieu, let's get started with some short explanations so you can understand these two words with relevant examples that will illustrate how to correctly use them in your written and spoken English!

There isn't much to say about the differences between "of" and "off", at least not much that can actually be helpful to remember the contexts that require the use of the former or the latter. Even so, it's worth mentioning that "of" is always a preposition, never having any other grammatical function in a phrase, whereas "off" can be used as a preposition, adverb or adjective as well. Read more about each of these words below!

As a preposition, "of" can be used with several different meanings, in multiple phrases. First of all, it is used to indicate belonging to someone or something. It can also be used after words that indicate the amount of something.

Thirdly, "of" is a preposition frequently used with dates, percents, numbers or ages. It can also be added after a noun that contains something, with exactly this meaning: containing. The same case is when "of" is used to refer to the material that something is made from.

“Of" is also a preposition that may connect certain adjectives or verbs with nouns. It can also be used to indicate causality, as synonym for "due to the reason" or "due to the cause"; or as part of word structures that indicate positions.

"Of" can also appear after nouns, used to describe feelings, things or actions experienced by or done to something else. Finally, "of" is used as a synonym for "written by" or "made/realized by".

Example 1: Meet Sarah, a good friend of mine. - "of" indicates the belonging or relation to someone.

Example 2: You need a kilogram of carrots for this recipe. - "of" is used after words indicating amounts.

Example 4: Add a cup of milk to the composition. - "of" is used after nouns that contain something.

Example 5: The dress is made of silk. - the word refers to the material that the dress was made from.

Example 6: She is so scared of sharks. - "of" connects adjectives/verbs with nouns.

Example 7: She died of heart attack. - "of" can also show causality.

Example 8: The sofa is in front of the TV. - "of" can appear in structures indicating positions or locations.

Example 9: The disappearance of dinosaurs is interesting. - "of" can also describe things experienced by something else. 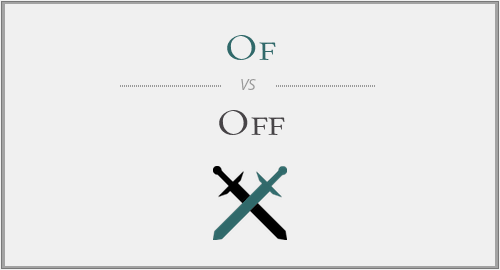 Example 10: I am searching for a book of Stephen King. - nonetheless, "of" can also be used as synonym for "written by".

Example 1: Please keep off the grass! - "off" is used when something is not connected or touching another surface.

Example 2: I ran off towards my family the instant I saw them. - "off" can also be used as synonym for "away".

Example 3: Please switch off the light. - "off" refers to an object not operating.

Example 4: I will take this weekend off, I am very tired. - "off" can also refer to a person not on duty.

Example 5: We went to an island off the coast of Spain and it was amazing! - "off" can also refer to a building or location in the proximity of another one.

Example 6: This bag was $50 off. - if a price is "off" with a certain amount of money, it is that much cheaper than usual.

Example 7: The landscape was amazing, you could see the mountains far off in the distance. - "off" may also refer to something far in the distance or time.

Example 8: The numbers show that their calculations were off by 20%. - as an adjective, "off" may describe something that is not correct and detached from the exact answer.

Example 9: This yogurt smells off, don't eat it! - food that seems "off" may be not fresh or good to eat.

As you have already observed with the examples above, "of" and "off" are both complex words, with multiple, distinct meanings and expressions that contain them. The best way to use them correctly is, unfortunately, not to find a logical explanation for them (which doesn't really exist), but to simply use your memory to learn them by heart.

Don't forget that practice makes perfect, and once you get used to these words, you will naturally know when to use them, without having to think twice.