This Grammar.com article is about Paralyze vs. Paralyse — enjoy your reading!

“The patient’s spinal cord is paralyzed,” said the doctor.

Did the author use right spellings of paralyze in the above sentence? Are you in doubt about the spellings and need more information to decide? If so, you landed on the right page. This article enlightens the readers about the difference between the two spellings, about the acceptability and use of each in specific parts of the world and why the two spellings exist.

Paralyze is used as a verb in English language where it means to cause (a person or part of the body) to become partly or wholly incapable of movement.

Mrs. Burrows had been paralyzed by a stroke.

Paralyze is also used to make (someone) unable to think or act normally, especially through panic or fear.

Some people are paralyzed by the thought of failure

To stop (a system, place, or organization) from operating by causing disruption is also called paralyze.

The regional capital was paralyzed by a general strike. 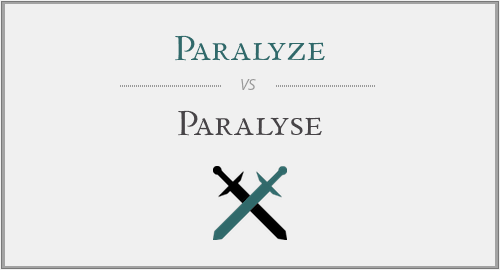 Paralyse and paralyze are different spellings of the same word. Paralyze is preferred in the U.S. and Canada, while paralyse is preferred outside North America. The spelling difference extends to derivative words such as paralysed/paralyzed and paralysing/paralyzing, but not to paralysis, which has two s‘s everywhere. Both spellings are old, and it was not until the middle 19th century that English speakers on both sides of the Atlantic settled on their respective spellings (though Americans settled on theirs a little earlier).

With the bond severed between fearful memory and its object, a phobia loses its power to paralyze. [Los Angeles Times]

Opposition members are threatening to withdraw their support of the Speaker, which would paralyze the National Assembly. [Globe and Mail]

Patients remain in an unconscious, paralyzed state for at least 24 hours and then the body is allowed to slowly warm. [Arizona Republic]

It is important to know that both spellings are right and are acceptable throughout the world. Paralyze should be used in America and Canada while paralyse should be used in European countries. If you are an American but are writing something for British audience, you should use the British spellings. However, if you are a British who is writing something for American audience, you should use the American spellings.