This Grammar.com article is about Peer vs. Pier — enjoy your reading!

Pier and peer are homophones, meaning they sound alike but are spelled differently, and mean different things. They are also easily confused words. The spell-check application in word-processing software doesn’t catch words that are spelled correctly even if another word should have been used in that context.

This article will discuss in detail both of these words for your ease of writing in the future.

Peer is used in English language as a noun which means a member of the nobility in Britain or Ireland, comprising the ranks of duke, marquess, earl, viscount, and baron.

Hereditary peers could still dominate the proceedings of the House of Lords.

A person of the same age, status, or ability as another specified person is known as his/her peer.

He has incurred much criticism from his academic peers.

Peer is also used as a verb in English language where it means to look with difficulty or concentration at someone or something.

Faye peered at her with suspicion.

To be just visible or come into view is also called peer.

The towers peer over the roofs.

Pier is used as a noun in English language where it implies the meaning of a platform on pillars projecting from the shore into the sea, typically incorporating entertainment arcades and places to eat.

A structure projecting from the shore into a river, lake, or the sea, used as a landing stage for boats. 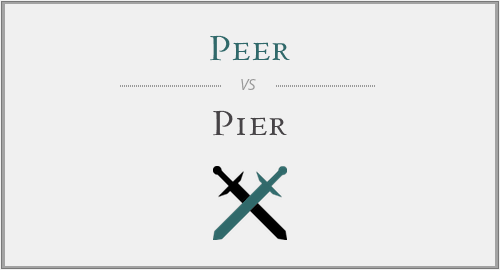 I left my boat tied up to the pier.

A solid support designed to sustain vertical pressure, in particular, the pillar of an arch or supporting a bridge is sometimes referred to as pier.

The piers of the bridge were a little loose.

The married peer was accused of “staggering” hypocrisy due to his role as head of the Lords standards watchdog, which sits in judgement over misbehaving peers. (The Mirror)

Who wins when a scary, but edge-pushing new climate study led by one of the world’s most prominent climate scientists makes headlines before it is either peer reviewed or published? (The New York Times)

Research suggests brain exercises which focus on self-control may enable youngsters to resist peer pressure – and stop them engaging in ‘risk-taking’ behaviours such as joining gangs, binge-drinking and taking drugs. (The Daily Mail)

As the summer season turns to the summer holidays for most families, Britain’s piers are filling up with visitors. (The Guardian)

The pier is built for walking, and it reaches a long way out from the shore. (The San Francisco Chronicle)

The rocks are the remains of piers that once supported the original Franklin Avenue Bridge constructed in 1889. (The Star Tribune)

Pier is a noun meaning referring to an elevated structure built out over the ocean. It’s used as a lookout point for people on a shoreline; it also refers to the supporting pillars of such a structure. Many US beaches have piers that have been cultural hotspots: Coney Island, NY, Folly Beach, SC, and Santa Monica, CA, just to name three. Peer is a noun meaning another person of your age group, school group, or fellow employee. It’s plural, peers, means many of the people in these groupings.

Standing under the pier, Delilah peered into an abandoned book she found on the beach. It belonged to someone named Jen Schuster. This was also the name of one of her peers growing up. Could they be the same person?