Reflex and reflect are confusing pair of words and rightly so, because in some accents, both mean the same, while in some others, if we use reflex in place of reflect and vice versa, the meaning of the whole sentence can change. In this Grammar.com, let me give you some insights about both these words and how to use them correctly.

The confusion comes from the origin of this word from the Latin word ‘reflectere’ meaning bend back, a noun denoting reflection. In British English, the word reflex is still (although rarely) used to denoted reflection (of light, thoughts, something bent backwards).

Reflex means an action done without any conscious thought or effort. For example, if someone throws a ball at you, your quick ‘reflex’ is to catch or divert it so you don’t get hurt. Thus, in the study of reflexes (reflexology), the hand, feet or head are called as ‘reflex points’ of the body.

·         Our fast reflexes can save us from some unexpected attacks.

·         Babies are born with basic reflexes like thumb sucking and holding fingers.

As we see in above examples, reflex can be used as a noun as well as an adjective.

Knee-jerk reflex – it is a medical term, also called as patellar reflex, is a sudden (jerking) kicking movement of the lower leg because of a sharp tap on the tendon below kneecap. This reflex is important as absence of this sudden kicking reaction suggests problems in the nervous system of the human body.

Reflexion is a word that was often considered a substitute for reflection, but is seldom used nowadays.

Reflect means bending of light after touching a surface. For example, heat from the sun reflects back to the space, the mirror reflects bright light and so on. 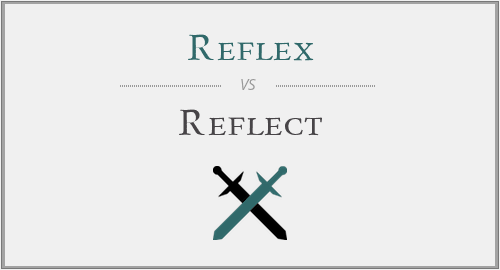 ·         Your carelessness will reflect poorly on your marks. (give a bad impression about)

·         Her passion was clearly reflected in the work she submitted. (represent something about)

·         You should reflect upon the reasons of the failure of this project. (think about)

·         The celebration of various festivals in India reflects the diversity of the nation. (represent in an appropriate manner)

Reflect, as we see can be used in multiple contexts.

“Her screaming was a reflex of her mood.”,

we can replace the word reflex with reflection!

“Her screaming was a reflection of her mood.”

This is a case where the similarity between reflex and reflection is evident.

In all other contexts, the meaning is quite different and hopefully after reading this article – easily understandable.