This Grammar.com article is about Translucent vs. Opaque — enjoy your reading!

If you can see through something, is it opaque, translucent, or transparent? Two of these words might fit, depending on how clearly you can see through the object, but the other word is definitely not accurate. All three of these adjectives describe the amount of light that can pass through something: all light, some light, or no light. Continue reading to find out the difference.

In this post, I will compare translucent vs. opaque. I will use each of these words in at least one example sentence, so you can see how they appear in context. Plus, I will show you a helpful memory tool that you can use to choose translucent or opaque correctly every time.

The word translucent originated in late 16th century (in the Latin sense): from Latin translucent- ‘shining through’, from the verb translucere, from trans- ‘through’ + lucere ‘to shine’. The word opaque originated from late Middle English opake, from Latin opacus ‘darkened’. The current spelling (rare before the 19th century) has been influenced by the French form.

The word translucent is used as an adjective in English language where it refers to (of a substance) allowing light, but not detailed shapes, to pass through; semi-transparent.

Her beautiful translucent skin was the center of attraction for everyone in the room.

The word opaque is also an adjective which describes a noun that is not able to be seen through; not transparent. 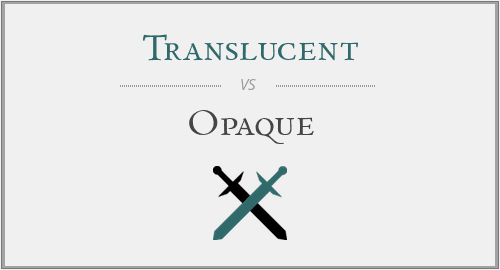 The strain of dulse they came up with, which looks like translucent red lettuce, is a great source of minerals, vitamins and antioxidants, not to mention protein. (The Daily Astorian)

To date, strategy and performance among the executive branch of government has been somewhat opaque. (The Brisbane Times)

But in the largely opaque process of choosing the secretary-general, the five permanent members of the Security Council, including the United States, have the real power. (The Miami Herald)