This Grammar.com article is about Venal vs. Venial — enjoy your reading!

Catholics everywhere are confused: do they commit venal sins or venial sins? And what is a venal/venial sin anyway? Whether they're Catholic or not, many writers are just as confused.

Consider the sentences below:

A venal police officer approached me.

She performed a venial sin.

Can you figure out what each of these sentences mean? And what the words venal and venial mean? If you don’t, then you have landed on just the right page. This article will discuss everything about venal and venial starting with their origins to meanings and examples.

The word venal originated in mid-17th century (in the sense ‘available for purchase’, referring to merchandise or a favour): from Latin venalis, from venum ‘thing for sale’. Venial originated from Middle English: via Old French from late Latin venialis, from venia ‘forgiveness’.

Venal is used as an adjective in English language where it describes a word which means showing or motivated by susceptibility to bribery; corrupt. It has synonyms like corrupt, corruptible, bribable, open to bribery, purchasable.

Venial is used as an adjective which means denoting a sin that is not regarded as depriving the soul of divine grace. It has synonyms like pardonable, forgivable, excusable, condonable, tolerable, permissible, allowable or understandable etc.

We cannot prevent ourselves sometimes from dreaming of performing venial if not mortal sins.

Venial also means (of a fault or offence) slight and pardonable. 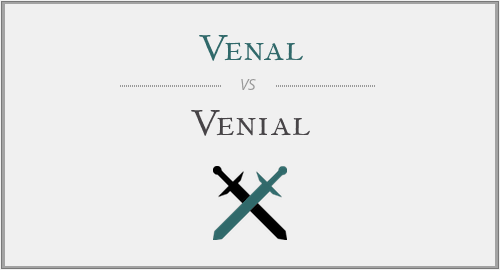 And not because they were any less venal or self-interested than anyone else, but because by their actions they tempered the boom itself, aided it in correcting. (Forbes)

I can’t believe there are more venal politicians than upright ones, yet the lowest common denominator is allowed to set the standard. (The Irish INdependent)

To inflate this bully-boy rant to the level of “racial discrimination” undermines genuine instances of racially motivated hatred and gives a venal, opportunistic appearance to Tymon’s court action. (The Irish Times)

So there are certainly venial sins in the area of sexuality; it’s not true that “every thought, word, or deed ‘outside of marriage’” is mortally sinful. (Commonweal Magazine)

For example, when I was an Evangelical one of the periodic arguments I ran across against Catholic moral theology was that the concept of mortal and venial sin is unbiblical. (The National Catholic Register)

Misreporting the nationality of a company director is rather more serious than the venial sin of, say, hyperbole in a corporate social responsibility narrative. (The Indian Express)

Venal means capable of being bribed, easily corrupted. Venal is an adjective, related words are the adverb venally and the noun venality. Venal comes into the English language in the mid-seventeenth century from the Old French word venel meaning for sale, in relating to prostitutes, and from the Latin venalis  meaning for sale, susceptible to being bribed. Venial refers to a transgression that is easily forgiven. In Christian theology, venial describes a sin which is not grave enough to keep the sinner from obtaining divine grace. Venial is an adjective, related words are the adverb venially and the noun veniality. Venial enters the English language around 1300, from the Old French word venial meaning excusable, and the Latin venia meaning forgiveness, pardon.