Wedding and marriage are two words which most of us use interchangeably. We sometimes unknowingly say, “I am going for my friend’s marriage”, not knowing that the usage of word marriage is incorrect here. In this Grammar.com article, we will explore the difference between the two words and why the above sentence is incorrect.

Wedding is the name given for the rituals, events and ceremonies that take place when two people take vows to live together for rest of their life. It is an indication of social acceptance of the relationship. Wedding is used to indicate the set of events that take place like the reception, bridal shower, wedding party, and the ceremony itself. That is why it is correct to say, “I am going for my friend’s wedding” and not friend’s marriage.

The word wedding originated from the Scots word ‘wed’ meaning a pledge. In some places of the world, wedding ceremonies go on for more than a day. All the collective rituals together are termed as a wedding.

Marriage is also used to indicate a combination of elements and can be used in different contexts unlike wedding. For example, her class is a marriage of science, math, history and literature i.e. a combination or fusion of all.

Some examples of marriage: 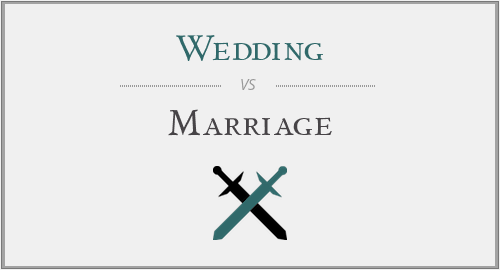