This Grammar.com article is about Chapter 10 - “Lead” vs. “Led” — enjoy your reading!

“Yesterday, they lead us astray.”

Here’s a quickie. Read on to learn that led is the correct word.

Lead vs. Led: An Overview

Many writers think that the word lead is pronounced to rhyme with red and is used as the past tense or past participle of the verb lead (pronounced leed). They are wrong.

The word lead is not the past tense of lead. It is a gross mistake to say:


Yesterday, he lead the parade.

Instead, the word is properly spelled led, and it serves both roles: past tense and past participle.

Thus, in the past tense:


Yesterday, he led the parade.

Or in the perfect tenses, we use the past participle led to produce:

Or in the passive voice, we use the past participle led to produce:


The parade was led by John.

Origin of the Mistake

Whatever the source of the mistake, it’s time to get rid of using lead when you’re trying to say led.

Previous: So to fix the title of this chapter…

Next: Let’s fix the title of the chapter … 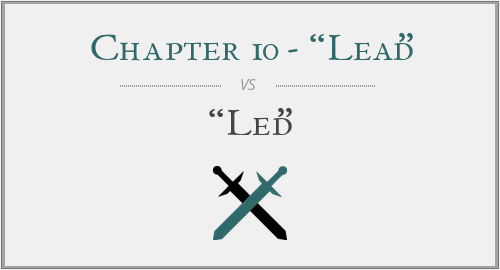