This Grammar.com article is about Chapter 12 - “Bring” vs. “Take" — enjoy your reading!

“Bring along this advice when you go to work.”

I wish the writers of the Seinfeld series paid attention to the differences between bring and take. For hundreds of episodes, they routinely used bring when they meant take. Those kinds of mistakes, of course, diminish our language, leading to further confusion among speakers and writers of English.

My Trip Around the World

Note: In my youth, I won a fellowship to travel around the world. Often, to meet local people, I’d find a popular bar and partake of local fare. In Tokyo …

Many years ago, in my youth, I was enjoying some sake at a quaint little bar in Tokyo. A Japanese student asked if he could sit down and practice his English with me. He offered to buy me yet another sake. We introduced ourselves and began what turned out to be a most enjoyable evening.

At least I’m told that I had a good time.

What’s the Difference Between “Bring” and “Take”?

One of the student’s main questions was this: What is the difference between bring and take? Though I had not yet declared myself an expert in writing, he must have noticed that I possessed the grammar gene and would willingly, even eagerly, enjoy an evening devoted to the discussion of language. (My affliction began at a very young age. I can blame it on my dear mother, who permitted absolutely no grammatical mistakes, and my dear Miss Hamrick, who was equally ruthless in enforcing the rules of grammar.)

So, in the Tokyo sake bar, how could I explain the difference between bring and take to my new friend? I immediately sensed the need for some examples.

"Here's the key difference," I said.

I then sensed a need to dramatically simplify my language. He spoke my language. I knew only a word or two of his.

“Here’s the difference,” I said. “A very important difference.”

And I proceeded to tell him that the difference between bring and take has to do with the location of the speaker and the location of any other actors who will be bringing or taking something from some place to some other place.

As I told my friend, you can break down the world into three types of people: the speaker (first person), the listener (second person), and the person being talked about (third person).

1st Person (Tokyo): “Do you plan to take your manuscript with you to Kyoto?”

I explained to my friend that take means that an action will proceed away from the location where the taker currently resides. I pointed out that take and go share a similar sense: the sense of leaving the current location and going somewhere else. The first person and the second person are in the same location, so moving anything from their location to somewhere else necessarily requires the word take.

My new friend was very pleased to learn that many Americans confuse bring and take.

“Yes,” I said, “it’s sad but true. Many Americans, even famous ones, confuse the two words.”

“What sorts of mistakes do they make?” he asked.

So I explained that many people use bring when they mean take. If I had had a time machine back then, I could have flashed forward to many Seinfeld episodes, where bring is routinely used for take.

Jerry is talking to Elaine, in Jerry’s apartment. He knows that Elaine will be having dinner with yet another boyfriend that night. So Jerry advises her:

“Be sure to bring your credit card. After all, he might not pay.”

But, alas, back then Jerry Seinfeld was a mere child. So I had to devise other tricks to help my friend thoroughly understand the differences between bring and take.

“Here are a couple of trick phrases you might want to remember,” I suggested.

Then I got an idea. I suggested to my friend that he take our pile of yen over there to the bartender, who stood off to the side, apparently ignoring us, and order up a couple of more sakes. He was glad to do so.

When he returned with the sakes, I pointed out that he had brought them back to our position at the bar. But at the moment he left the bartender to return the sakes to our location, he was, from his own perspective, in the process of taking them to our position.

1st Person (Tokyo): “Please bring your manuscript to me when you visit Tokyo.”

Stepping into Another Person’s Shoes

My new friend was perplexed. So I explained:

“Quite often in the English language, we will put ourselves in someone else’s shoes,” I observed.

“You wear someone else’s shoes?” he asked. “But we don’t wear shoes in a sake bar!”

With the concept of “figure of speech” firmly in place, I pointed out that we often step into other people’s shoes. When we do, we must choose bring or take from their perspective. If the first person in Tokyo asks the second person in Kyoto to bring the manuscript to Tokyo, the second person will step into the shoes of the first person, and from that perspective, bring along the manuscript to Tokyo.

So I fashioned another conversation:

2nd Person (Kyoto): “Great idea! Can I bring anything?”

Here the second person is speaking from the first person’s perspective—as if he has already arrived at the party. Hence the need for bring. If the second person had said, “Can I take anything?” the implication would be that he planned to go to somebody else’s house for dinner.

To illustrate the meaning of bring, I told my Japanese friend to get the attention of the bartender and ask him to bring us a couple of more sakes. I then pointed out that from the bartender’s perspective he will take the sakes over to the Japanese student and the American traveler.

We toasted our good fortune of having met each another and continued our grammar lesson.

I then pointed out that the first person and the second person might refer to the act of moving something to some third location. Their conversation would go like this:

1st Person (Tokyo): “Do you plan to take your manuscript with you to Osaka?”

I then spotted a group of travelers at the other side of the sake bar. So I said: “Let’s take our sake and pile of yen over to those guys and introduce ourselves.” The other group, being grammatically aware, said: “We’re glad you brought your pile of yen over here to us. Why don’t you take some of it over to the bartender and order up a bunch of sakes for everybody.”

We were only too glad to oblige.

After we bought some rounds, they bought some rounds. After a while, my Japanese friend and I returned to our original position at the bar. We talked about the people we met. I pointed out that these other people were third persons. So I fashioned a conversation between a first person and a second person about a third person:

1st Person: “Will Fred invite his mother to visit him during the holidays?”

2nd Person: “Yes, he brought her home last year, and I think he wants to bring her this year.”

With this newly found grammatical wisdom, my friend caught the attention of the bartender. In perfect English he said:

My Friend: “See those travelers over there? They would like you to bring them some more sake. Here, use our pile of yen.”

Bartender: “I’ll take them some right away. Arigatou gozaimasu.”

Apparently, the bartender had been paying attention to our grammar lesson all along.

Yours Truly: “While you’re at it, please bring us a couple of more as well.”

My friend had assumed the perspective of the travelers and correctly used bring to describe the act of the bartender of moving some sake from the bartender’s location to their own location. He was beginning to understand the in-your-shoes approach to analyzing bring and take.

So in Tokyo, at the sake bar, my friend and I stepped into each other’s shoes, even though we weren’t actually wearing any. It was a sake bar, after all. We learned a lot about each other’s culture and language. At this quaint little bar. Where the bartender brought us way too much sake.

My friend learned some English.

And I learned that those little sake glasses are far bigger than you think.

Next: I hope you’ve learned to fix the chapter title… 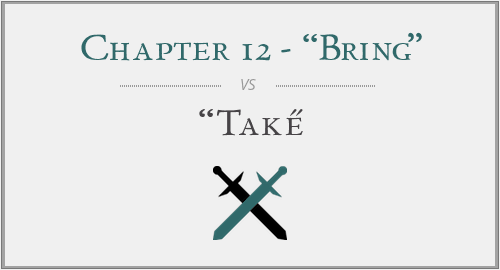