This Grammar.com article is about Chapter 8 - “Affect” vs. “Effect” — enjoy your reading!

“Bad habits will effect your writing.”

Affect vs. Effect: An Overview


These technologies can effect the way the company expands its business.

The correct word, of course, is affect.

Affect as a Verb

Here’s the difference: The word affect usually serves only as a verb and will never appear as a noun in almost all fields of study. The only noun meaning of affect occurs in psychology, where a person’s affect is an emotion, or in psychiatry, where a person’s affect is an observed emotional response. But in most writing, one thing affects (verb) another thing, but it cannot have an affect (noun) on another thing.

Indeed, few, if any, writers confuse the use of affect by trying to make it act as a noun.

Effect as a Noun

The confusion arises, instead, with the word effect. In most contexts, effect serves only as a noun, not as a verb. Thus, one thing has an effect on another thing or one thing produces an effect, a result, a consequence. Thus:


We must analyze the effect of the drug on the nervous system.

One term very popular with moviegoers might help you remember that effect usually serves as a noun:

Effect as a Verb

Unfortunately, the word effect does have a verb meaning: to produce, to bring into being, or to effectuate. Thus:


The company issued pink slips to thousands of workers in order to effect savings.


The company effected considerable savings by laying off workers.

In each example, the verb effect means to produce.

If you want to ensure that you always use these words correctly, then simply don’t use the word effect as a verb. Plenty of other verbs mean the same thing: produce, bring about, result in, create, originate, spawn, and others.

One thing will affect another thing. The policy affected the economy. That’s the verb form.

One thing produces an effect on another thing. The policy had an effect on the economy. That’s the noun form.

Previous: So the title to this chapter should read…

Next: “Impact” as a Verb 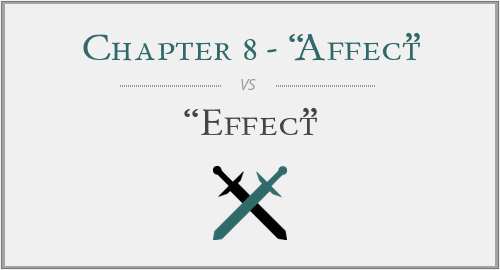