This Grammar.com article is about Active Voice vs. Passive Voice — enjoy your reading!

Active and passive voice sounds like something complex and complicated, but really, it's not. It's about the relation existing between the subject and the action of a sentence, more exactly about who does what. But the best way to understand these is through relevant examples so let's go for those!

When do we use active voice?

Active voice is the one more preferred in daily conversations, in letters and actually in any kind of writing. It is considered to be more logical, fluent, more readable and more elegant. Active voice creates a direct, strong message, easily comprehensible by the audience because it's presented straightforward.

Example: The girl washed her dog. - in active voice, the logical subject is the same with the grammatical subject of the sentence - the girl, and it is showed how she does the action of washing, which is supported by a third party, by the dog.

When do we use passive voice?

But before that, let's take the same example as above and to take it from active to passive voice so you clearly understand the difference.

After you get the difference between active and passive voice, there is nothing difficult about them anymore. It's simply about the way you choose to express your message: more directly or subtler. If we were to resume everything in the shortest possible explanation, passive voice has a passive grammatical subject, that supports the action expressed by the verb and pursued by a third person (the logical subject), whereas active voice is directly expressing the way the grammatical subject (the same with the logical subject) of a sentence pursues an action supported by a third party (the object of the sentence). 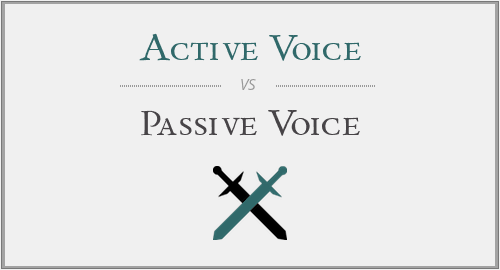