This Grammar.com article is about Appraise vs. Apprise — enjoy your reading!

Keep me apprised on what the jeweler says after appraising the family jewels.

English language is an amazing mixture of words and phrases but sometimes we just fail to understand and tell apart some words. If you are a proficient reader or writer, you must have come across the above mentioned words, or at least one of them. Although appraise and apprise are not commonly used while speaking as they have easier and informal substitutes but a book worm like you would know. What you might not be cleared about is the difference between the two and the places where appraise can be used while apprise cant. We will guide you in this article on when to use which so next time you read a urbane book you don’t have to open up the dictionary.

As you must have noticed from the above sentence, apprise and appraise are both used as verbs in English language, all the more reason for us to confuse one for the other. ‘

Appraise dates back to the 19th century where apprize meaning, ‘set a price on’ was associated with praise ‘complement someone or something’. Appraise implies the meaning of assessing the value or quality of something. The men stepped back to appraise their handiwork. Appraise is also used to assess the performance of an employee formally. My company prefers team appraisal instead of individual appraisal. Appraise is also employed in an official setting to set a price or value on something. Her goods were appraised at a million.

Late in 17th century, apprise originated from the French word appris which is the past participle of apprendre meaning learn or teach. In English language, this verb means to inform or tell someone about something. It has synonyms like brief, notify and enlighten etc.

She apprised Tom of what happened in the car. 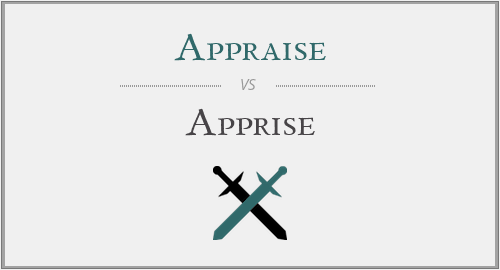 Showing the verbosity of an Al Quaeda operative at an interview at Guantanamo Bay, he briefly apprised me of the details. (Herald Scotland)

As the women stand and watch from beneath the shady eaves of the clinic, the men gather around, appraising us curiously. (Australian)

It was also used to appraise the past activities of the service in terms of its strengths, weakness and the way forward. (Ghana News Agency)

The Criminal Code specifies that anyone who is HIV-positive must apprise their sexual partners. (Globe and Mail)

Appraise and apprise are not etymologically related and they share no definitions with each other, yet they are easy to confuse as they sound similar and are both somewhat rare. If you need help remembering them, keep in mind that appraising something often involves praising it (when it is worthy or valuable), and apprise both rhymes with and is similar in meaning to advise.

What will you say if you were asked to appraise this article?