This Grammar.com article is about Barbeque vs. Barbecue — enjoy your reading!

People love "barbecue time", as they usually associate it with a free day spent with friends, chatting and feeling good outdoors. But taking a closer look at its name, this word started to create confusion within the last years.

You might have seen the word recently spelled both "barbecue" and "barbeque", but which is the correct version after all? Let's find out what makes this difference and which one is the official form.

"Barbecue" is the officially accepted word that exists in all editions of English dictionaries, even in older ones. As noun, it refers to a party where fresh food is cooked outdoors on an open fire. At the same time, it can also refer to the metal frame used over the fire to cook outdoors. As a verb, it refers to the actual action of cooking on a barbecue.

"Barbeque", in general, can be considered a misspelling. It doesn't exist in official publications and there is not specified anywhere that it is accepted as another form for "barbecue". Plus, it doesn't carry any other meaning either. Yet, there is an explanation for the confusion and the reason why it appeared. A common abbreviation for "barbecue" is "BBQ", therefore this might be the source of the "q" from "barbeque". This does not constitute, anyway, a solid reason to accept this error as a correct form, at least not yet. Even with a lot of people preferring it "barbeque", "barbecue" still remains the most frequently used and the only officially accepted form.

When do we use "barbecue"?

This form is considered to be the correct one, therefore you should always use "barbecue" with the meaning explained above, as a noun or as a verb. There is no situation that requires the use of "barbeque" instead of this form.

When do we use "barbeque"?

Even though it can be considered wrong, "barbeque" has been more and more used, especially on restaurant menus or food companies. So even though avoiding this spelling is recommended, using it in food context, on a menu for example, can be considered appropriate and even fancy.

"Barbecue" is the traditional and correct spelling, whereas "barbeque" is just a confusion created by the "BBQ" abbreviation. So whenever you are in the situation to choose between these two forms again, just go for "barbecue". 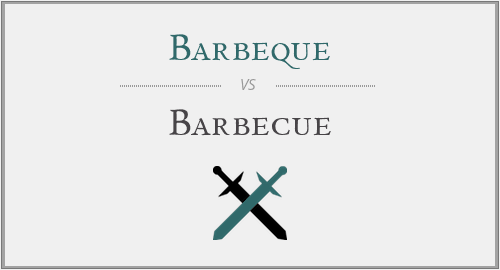