This Grammar.com article is about Calfs vs. Calves — enjoy your reading!

English language can be very confusing when it comes to certain words and their singular and plural forms. Sometimes to convert the word in plural only takes putting an s at the end of the word; book becomes books, phone becomes phones. However, that is not always the case as we look at the pair of words being discussed in this article today; Calf and calves.

Calf is a noun which means a young bovine animal, especially a domestic cow or bull in its first year.

He hunted down the calf.

Calf is also used as a noun to describe the fleshy part at the back of a person's leg below the knee.

She toned her calf muscles.

Calves is the plural form of the word calf. It is a noun that is used to refer to either a baby animal or the lower part of leg, under the knee.

To make the word calf into a plural, calfs is not the correct way like it is usually used according to the English language rules. However, for calf’s plural calves is used which is an exception to that rule like numerous other words, just like knife becomes knives.

He would help feed chickens — 135,000 of them — and tag calves on his father’s 250-acre farm. [New York Times]
But her toned calves could still be seen as she turned around in her black high heels by Gianvito Rossi. [Daily Mail]
There are no wild cattle remaining to give us an indication of the natural weaning age of calves. [Principles of Cattle Production, Clive J.C. Phillips]
Surgical techniques to enhance buttocks’ or calves’ volume consisted of placement of silicone implants below the gluteus maximus muscle in the buttocks or over the internal gemellus muscle in the calves. [Autologous Fat Transfer: Art, Science, and Clinical Practice, ed. Melvin Shiffman]
One farmer claims to have damaged his iPhone while calving, accidentally inserting it into the rear of a cow. [Telegraph]
Long calving intervals on Irish farms result in reduced milk yield. [Irish Independent]

Calf is the singular of the word while calves is the plural for the same word. It refers to the lower part of the leg, under the thigh or a baby of some mammals. 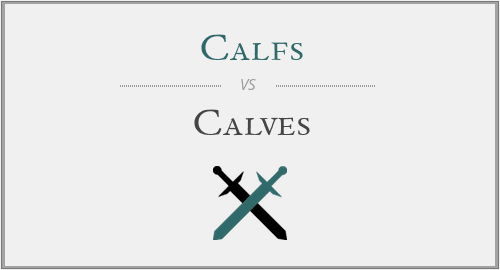