In this Grammar.com article you will learn the differences between Cancelled and Canceled.

A student’s best friend and a party lover’s worst enemy, cancel, has two possible forms of past tense, cancelled/canceled. Consider this:

The English class has been cancelled today as the teacher is on sick leave.
The drummer had an accident, so the party is cancelled.

When to use which form of cancel depends on what you call home. But first off you need to know what are some possible meanings of the word cancel.

The most common usage of cancel is as a verb where it is means a common decision that an event will not take place as it was scheduled. The annulment of a task or arrangement or abolishment of an obligation is represented by cancel.

Erica’s visa request was cancelled by the American Embassy.

The neutralization or negation of a force or effect of something by another thing is also described by cancel. The positive and negative electric fields cancel the effect of each other. Or cancel is also implied in mathematics when the equal numbers are present on each side of the equation.

Multiply by 5 cancels out divide by 5.

Cancel is a mark made on a postage stamp to show that it has been used. She franked and marked the stamp with cancel. When a new page or section inserted in a book to replace the original text, in order to correct an error, it is also known as cancel page or section.

Now let’s discuss when to use which cancel. All you have to know about the cancel dilemma is that Americans like a single l, whereas British like two. The history of this confusion originated when Noah Webster, a famous American lexicographer, decided that some words will do well with as little letters as possible, countering the British spellings of a lot of words. One unfortunate word among them was cancel’s past form. He severed an l from the original British word cancelled and gave rise to a new spellings with a single l, canceled. His variation of the word first appeared in Webster’s 1898 Dictionary but wasn’t really successful. The Webster’s spelling did not beat out the original ones until late 1900s and since then it became the widely accepted way of writing canceled in American English. This distinction in spellings extends to cancelable/cancellable and canceler/canceller but not to cancellation, which is only accepted with two ls all over the world.

Flight cancellations have piled up deeper than snow drifts this winter. (The Wall Street Journal)

In this example, note that cancellation is written with two ls regardless of the American English and British English variations as it is the only acceptable and correct spellings. 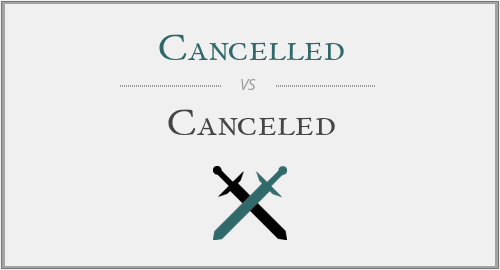 According to the American English, the past tense of cancel is canceled, with a single l so if you live in America you are bound to write canceled.

Under current law, it is scheduled to rise to 6.8% on July 1, an increase that Obama has called for canceling. (Los Angeles Times)

The original word, which is adopted by British and the rest of English speaking communities of the world (except America) is cancelled with two ls. So if you reside anywhere apart from the United Nations you can happily write cancelled.

A New Zealand freediving champion plunged to 125m on a single breath only to have what would have been a world record cancelled. (New Zealand Herald)

The AP Style (that is, the one followed by the Associated Press) is to write “canceled” in American publications and “cancelled” in other English-speaking regions.

So the simple word cancel has two alternative past forms, canceled and cancelled, which are both acceptable. The choice of using each alternative depends on the writer’s choice or country of origin as canceled with one l is predominant in America while cancelled with two ls is predominant everywhere else except America.

We hope your confusion about these two words is canceled now!