In this Grammar.com article you will learn the differences between Capital and Capitol.

The legislators were called to the capitol to discuss the issues of country’s capital.

The above sentence constitutes two words, capital and capitol, which are both homophones. This means that capital and capitol have same sounds but totally different meanings and one in not replaceable by the other one. This article will help you understand the meanings of both of these words so you can use them correctly in your sentences and writing without any confusion.

Capital with an a, is used in English language as a noun that have two meanings. The first meaning of capital is the city or town that functions as the seat of government and administrative center of a country or region. Washington DC is the capital of United States of America. The second meaning of capital is wealth in the form of money or other assets owned by a person or organization or available for a purpose such as starting a company or investing.

Rates of return on invested capital were high

Landy is a capital fellow.

An informal and dated use of capital is as an exclamation where it accounts to the expression of approval, satisfaction, or delight. 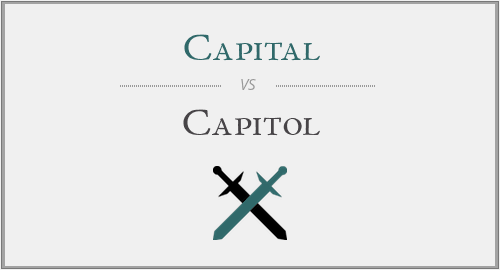 Capitol with an o is utilized in English language as a noun to define a building in which a state legislative body meets, or a group of buildings in which the functions of state government are carried out. The dome of the state capitol took 7 months to restructure. Capitol specifically also means the building in which the U.S. Congress meets at Washington.

The congresspersons were called to the capitol for an emergency session.

Wilderness — with a capital “W,” according to the Wilderness Act — offers the values of “solitude,” and “primitive, unconfined recreation.” (New York Times)

The House will take up a bill this week adding one statue of a District luminary to the halls of the Capitol. (Washington Post)

In 1972, the U.S. Supreme Court banned capital punishment, but the decision was overturned in 1976. (Columbia Missourian)

What it does have is the state capitol building, Vermont State House, with its impressive gold  leaf dome back dropped by the wooded hills of Hubbard Park. (Guardian)

Capital is the significant city or money used by some company of organization. Capitol however is the place where the government takes important decisions regarding the country. You can be called to a country’s capital at any time but you can only be called to the capitol if you an important congressman.