This Grammar.com article is about Catalog vs. Catalogue — enjoy your reading!

English is a language used in various countries and those countries have made modifications to the language according to their own requirements. Those modifications include changing spellings of numerous words including the pair we will be discussing today; Catalog and catalogue.

The word catalogue originated from late Middle English: via Old French from late Latin catalogus, from Greek katalogos, from katalegein ‘pick out or enrol’.

The word catalogue is used as a noun in English language where it means a complete list of items, typically one in alphabetical or other systematic order, in particular. A list of all the books or resources in a library is a catalogue.

Catalogue is also a list of works of art in an exhibition or collection, with detailed comments and explanations.

This collection of paintings is the subject of a detailed catalogue.

The word catalogue is also used as a verb which means to make a systematic list of (items of the same type).

It will be some time before the collection is fully catalogued.

To enter (an item) in a catalogue is also termed as catalogue.

The picture was withdrawn before being catalogued.

Yesterday, I was looking through the catalog of my favorite brand.

Only in the late 19th century, with the movement in the U.S. to develop a uniquely American form of the language, did catalog begin to make a comeback. It was not one of the original American spellings, though; the word is listed as catalogue in all early editions of Noah Webster’s dictionary, which played a large role in conventionalizing many other uniquely American spellings. By the 1890s, however, instances of catalog are easily found in all sorts of American texts.

The company will continue to produce print versions of its other seasonal catalogs. [Wall Street Journal]
The catalog is filled with hand-drawn illustrations (shown above), color photographs and articles from the 1800s. [Los Angeles Times]
Until the mid-20th century, the world’s greatest artworks were cataloged in shoeboxes. [New York Times]
These brightly painted sculptures cataloging styles of Southern houses are accompanied by short texts, or “legends,” as the artist called them, that document their histories and the lives of their inhabitants. [The New York Times]

Both the words have similar meaning and similar usage. The difference only occurs in the way the words are spelled as catalog is preferred in American English while catalogue is in Britain. Remember, catalogue with an alphabet ‘U’ is used in British language just like the word favourite with a ‘U’ is. 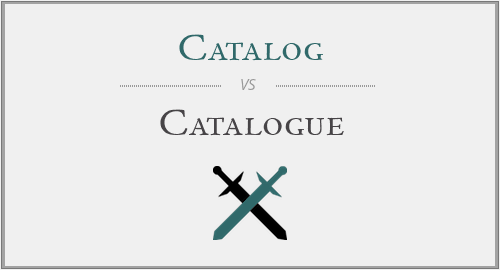