This Grammar.com article is about Cavalry vs. Calvary — enjoy your reading!

The similarity between the spellings of “cavalry” and “calvary” can easily confuse you, especially because none of these words is frequently used nowadays, so the contexts aren’t very helpful in identifying the meanings of these words and the correct uses of them.

In order to clarify this entire situation, the explanations below might be quite helpful to you. Check below what “cavalry” is, when you should use it in your conversations, and what “calvary” is referring to. Knowing their significations is the best way to avoid any future doubts, confusion, lexical errors or grammatical mistakes.

Both nouns are old. But while both of them refer to concepts related to the past, one is more likely to be used in daily conversations than the other. More exactly, “cavalry” is still a quite usual word, especially in the historical domain, in archeology, museums, stories, movies etc.

“Calvary”, on the other hand, is a term that you will likely find in old texts, especially in the domain of religion and religious history. The major difference between them, anyway, is that “cavalry” is a common noun, whereas the other is the name of something, the name of a place with historical and religious importance. We are going to discuss more about this matter in the next paragraphs.

When do we use “cavalry”?

“Cavalry” is a common noun, frequently used in the past and still often used in the present, especially in historical contexts. “Cavalry” refers to the group of soldiers who fight on horses. More than one cavalier, organized in a group, represent the “cavalry”.

Example: Horses of the cavalry were well equipped with weapons and well trained so resist during fights. – “cavalry” defines a group of soldiers who fight on horses.

When do we use “Calvary”?

“Calvary”, on the other hand, is not a common noun, and will likely be found only in religious or religious historical texts. “Calvary” is actually the name of the hill from the outsides of Jerusalem, the place where they say Jesus Christ was crucified. At the same time, the term can represent a sculpture or a painting representing the moment of Jesus Christ’s crucifixion.

Example 1: They say that Jesus was killed on the cross on Calvary. – “Calvary” is the name of the place where they believe Jesus Christ was crucified.

Example 2: A big calvary dominates the church. – “calvary” can also refer to a painting or a sculpture representing the crucifixion of Jesus Christ.

“Cavalry” and “Calvary” refer to two completely different concepts, and their meanings, although old, are sourced in different domains. Given their connotations and relevance, it is essential that you are very careful before choosing your spelling, because not only that your text can become confusing if you spell them wrongly, but it might also be considered offensive. Simply remember that “cavalry”, just like “cavalier”, is about people fighting on horses, whereas “calvary” is related to religion and the crucifixion of Jesus Christ. 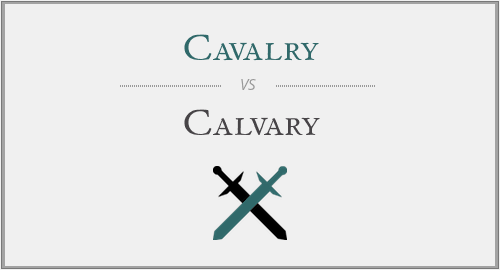