Cheap and Cheep sound the same, but have different meanings and different spellings. In this Grammar.com article, you will learn the differences between these two confusing words.

Cheap and cheep both sound same but their meanings are entirely different. The words with similar sounds but different meaning and spellings are known as homophones. Homophones are misused and often mistaken for each other while speaking and writing. This pair of homophones is described below with easy meaning and everyday examples to clear out the misconception.

Something which has lower price as compared to the relative things is called cheap. If the quality of an object is inferior or it has less worth than the others it is also cheap. A place which charges low for the things it sells is also cheap. A cheap motel. Cheap can be substituted for words like inexpensive, economical, competitive, affordable, reasonable or low priced.

He wore a cheap pair of shoes on prom.

In this example, the shoes a person wore were inferior in quality and low in price as compared to the shoes everyone else wore.

Public transport is cheap and reliable.

Here, cheap is taken in terms of price only, as the bus and subway service cost less than private transport.

Cheap serves as an adjective to describe the act of contempt. A cheap trick. It is also used when describing something which was achieved in a discreditable and reprehensible way.

Tracy is celebrating a moment of cheap triumph.

In this example, Tracy achieved something in a wrongful way so she her triumph is cheap.

Cheap has same meaning when it is used as an adverb i.e. low price. When something is at a low price or is for less money, it is called cheap but cheap is an adverb here which describes the verb.

The property went cheap because of the war.

Here, the property which was once expensive went cheap (adverb) due to war. Going cheap is adverb whereas cheap itself is an adjective. 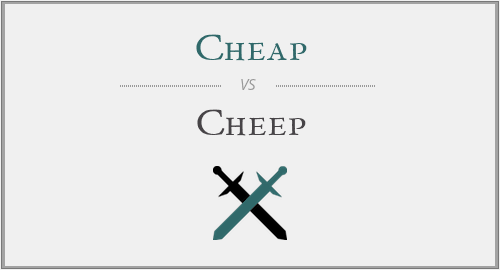 Cheap has a homophone cheep which a high pitched, squeaky cry made by a bird. In simple words, the sound made by a bird is called cheep especially when that sound is short and high.

A sound that resembles a bird’s cheep is also known as cheep.

The alarm’s cheep woke me up.

An informal way of using cheep is for a slightest sound or little sound from a person.

I’m dying to hear a cheep from them.

In this example, cheep is used to portray a small contact or communication from someone which can be in the form of phone call (sound) or email etc.

The act of making a small squeaky sound is also known to be cheep. Here cheep is used as a verb to describe the action taking place, that is, the making of this particular sound. With synonyms like chirp, chirrup, twitter, tweet, peep, chirr, warble and trill, cheep can be used to describe the action of birds making high pitched sounds.

The chicks cheeped loudly and paddled for shelter.

Next time you pick your pen up for writing something make sure you know the difference between this pair of homophones. When something is being sold for less money it is cheap but when a young bird make a shrill voice it is cheep. Cheep of the bird can be a noun or a verb but a cheap cloth can only be an adjective or an adverb.