This Grammar.com article is about Coma vs. Comma — enjoy your reading!

Most pairs of words that are frequently misspelled do have some subtle differences in the way they sound, due to a different letter or pronunciation. That makes it easier to spot the difference between them. But when it comes to “coma” and “comma”, there’s no such thing. Except for the fact that the consonant “m” is doubled, there is no clue in the spellings of these words that they are somehow different. So, it’s almost impossible to distinguish them from their pronunciation.

The only way to spot the difference between “coma” and “comma” is from the context where they are used. And this makes it essential to understand what each word refers to and how it is used correctly. Check these aspects below, as we explained the simply and quickly for you!

Both “coma” and “comma” function as nouns. And both are usual words in English, you will most probably hear them often because they are frequently mentioned in daily conversations.

But while “coma” refers to a medical condition, “comma” is related to literature and writing. So, there is no way you are allowed to confuse or misspell these words, because they appear in completely different contexts, which are suitable for one and inappropriate for the other.

“Coma” defines a medical condition when someone is not conscious for a longer period of time. It’s a state somewhere between being alive and dead. Usually, a person who is in “coma” is connected to some devices that monitors their vitals and helps them stay alive, at least physically.

Example: The patient has been in a coma for over two weeks. – “coma” is the medical condition of a patient who is not conscious and can barely stay alive.

Even though it sounds just like “coma”, “comma” has actually nothing to do with people or medicine. The word is used mostly in the context of writing, in grammar or literature. “Comma” actually defines the mark for the symbol “,”. It is the mark used to separate parts of a sentence or items in a list.

Example: You usually have to use a comma between adjectives, if you use three or more to describe the same noun. – “comma” refers to the mark used to separate more parts in a sentence (“,”).

“Coma” and “comma” do sound the same and function as nouns, but they refer to completely different concepts. The first is used for the condition of an unconscious person, while the other is a punctuation mark. Remembering these quick definitions will certainly help you distinguish “coma” from “comma” according to the context where they are or should be used. 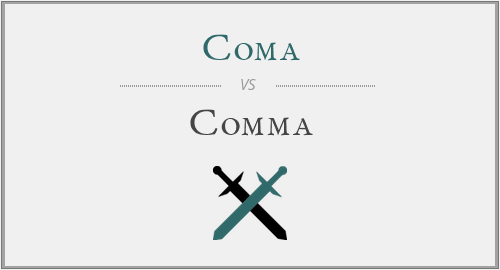