What is the difference between Complement and Compliment?

The words compliment and complement sound exactly same but their meanings are totallydifferent. Here are some everyday examples that will help you in better understanding of boththe words.

She complimented Steve on his performance.

Employer’s compliment on his work made the employee’s day.

The company thanked its customers for their cooperation and complimented the manager for his resilience.

In this example, complimented is used in the past tense and it describes the action of ‘praise’ for the manager taken by the company for his resilience.

Compliment’s homophone complement has a different origin and meaning. Complement isoriginally derived from a Latin word, complēmentum, which is something which completesanother thing. Complement is a character that contributes additional features to something insuch a way as to enhance or highlight its quality.

A fine wine is a complement to a fine meal.

Compliment can also be used as a noun with a slightly different meaning which is a numericalvalue or a quantity without which something is incomplete. It is either of two parts required tomake something whole. 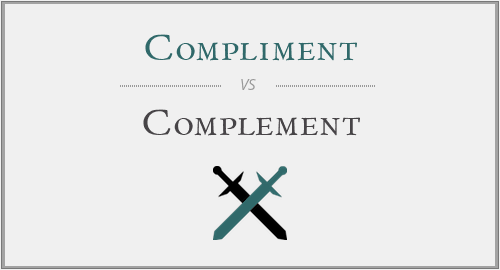 The full complement of staff engaged in the time of crisis.

Complement when used as a verb imply the meaning of completeness or addition ofcharacteristics to make something better. In sentence formation, it can either be used with theobject or without the object. When used with object, the meaning is same as that describedbefore.

These shoes complement your dress better than the ones you wore before.

Note that this example makes use of the object i.e. dress which is signified by the subject andhas enhanced quality than before.Compliment is also used when subject does not require an object for its clarification. This iscalled ‘use without object’ and compliment was used without an object in the past.

The team of doctors was complemented.

This is the simplest way of using the word compliment, as it does not make use of the objectand is still meaningful. Although the usage of complement like this is an obsolete practice nowbut it make sense.

If someone passes you a good remark about your behavior, he is complimenting you (verbform). The teacher complimented Emma for her respectable behavior in class. And if youchoose something to enhance the quality of some other thing, you are complementing (verbform) one thing with another. A pair of spectacles complemented her official apparel.