This Grammar.com article is about Counsel vs. Council — enjoy your reading!

The pronunciations of “counsel” and “council” are almost identical, and this is the reason why they are so often confused. But despite their similarity, they have distinct meanings and should be used in different contexts.

The safest way to make sure you are using words right is to ensure you understand their meanings. This will help you remember in which situation or expression you can use each of them. Grammar.com will provide you some clear explanations to help you out with “counsel” and “council”.

“Counsel” can be used both as a noun and as a verb, referring to similar concepts, but as different parts of speech.

“Council” might create the impression of a synonym for “counsel”, due to its similar spelling, but is definitely not – if you use it instead of “counsel”, or vice versa, it will definitely be a misspelling. First of all, “council” is only defined as a noun and secondly, it refers to a different concept than “counsel”. Read more about what “counsel” and “council” represent within the examples provided below.

When do we use “counsel”?

As a noun, “counsel” primary defines a lawyer, or a person who speaks for someone in the court and who offers advice regarding laws. In literature, “counsel” is also used as a synonym for advice.

In addition, “counsel” is often used as a verb, defining the action of advising someone to do something or to solve a problem.

Example 1: The counsel explained the legal procedures to the stakeholders. – “counsel”, as a noun, is used with the meaning of a legal advisor, a lawyer.

Example 2: I need your counsel on this matter. – literary, “counsel” can also be used as “advice”.

Example 3: I asked your father to counsel me on this case – I know he has some valuable experience in the legal field. – as a verb, “counsel” defines the action of offering advice on a matter.

When do we use “council”?

Council should only be used as a noun, defining a group of people usually elected to control an area, either a city or a town, etc. In addition, “council” can also represent a group of people in a company, who are qualified and elected to give advice or to make decisions.

Example 1: The Council of the town decided to invite several foreign artists for the New Year celebration. – “council” is the group of specialists elected to run a town.

Example 2: Our research council decided to intensify their activity during the winter holidays, in order to get more information about our consumers’ profiles. – “council” can also define a group of specialists who make decisions or offer advice within an organization/company.

“Counsel” and “council” should never be replaced or confused, because they define different concepts and can completely change your message. To keep it short, “counsel” can be used both as a verb (referring to offering specialized advice) and as a noun (defining a qualified person who offers advice), whereas “council” can only be used as a noun, referring to a group of people who run a certain area in a country or a department in a company. 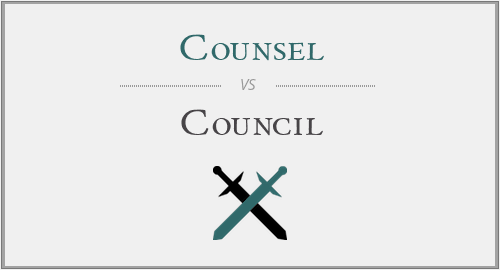