This Grammar.com article is about Course vs. Coarse — enjoy your reading!

Consider the sentence written below:

The weaving course he took did not demonstrate on how to stitch coarse weave.

A little confusing, isn’t it? Course and coarse are both used in the sentence but are their meaning clear to you?

The first course is the educational lessons one gets in order to get some skill or knowledge, the later coarse is the type of cloth that is rough. But how to remember them both and differentiate between them while writing in a flow? Don’t panic! We are here to help you. This article will enlighten you about the meaning, usage and difference between the two homophones (words that sound alike but mean different) along with a little tip on how to tell them both apart.

As a noun, course is used in English language where it means the route or direction followed by a ship, aircraft, road, or river. It has some synonyms like route, way, track, direction, tack, path, line, journey or itinerary. The road adopts a tortuous course along the coast. Course is also used as a noun when it implies the meaning of a dish, or a set of dishes served together, forming one of the successive parts of a meal.

The guests were offered a choice of main course and a delightful dessert at the end.

An area of land set aside and prepared for racing, golf, or another sport is also called course. Course is also used to describe a series of lectures or lessons in a particular subject, leading to an examination or qualification. The business studies course lasted for 3 months. A continuous horizontal layer of brick, stone, or other material in a wall is also referred to as course.

Six courses of bricks were laid.

Course is also used as a verb in English language where it means to move a liquid without any obstruction. Tears were coursing down her cheeks. When a pursue game, especially involving hares with greyhounds using sight rather than scent is played, it is termed as course.

Many of the hares coursed escaped unharmed.

Coarse is used in English language as an adjective where it describes a noun that is rough or harsh in texture. Her dress was made up of coarse woolen cloth. When referring to something with large grains and particles, the adjective coarse is used. 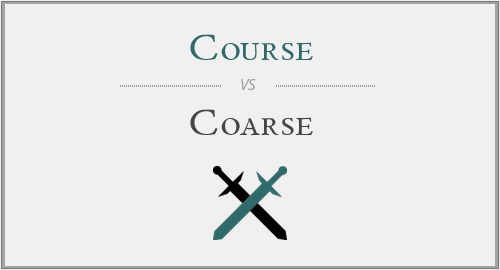 The coarse sand pricked her feet.

A person whose features are not elegantly formed or proportioned, course is used to describe them. His coarse, ugly features contorted with rage. The poor and inferior quality food or drink is also called coarse. This wine is harsh, tannic, and coarse. A person who speaks very rudely or uses a lot of vulgar expressions in his speech is known to have a coarse speech.

His course speech dimmed the mood of the whole group.

Based on the study of the use of coarse language by Canadian fishermen, Menzie (1991) concluded that coarse language can reinforce a culture of gender inequality. [Handbook of Gender Research in Psychology, Joan C. Chrisler, Donald R. McCreary]

Double the size of fine or medium, and you’ve got coarse bulgur, which has an accordingly more substantial flavor and texture. [Bob’s Red Mill Cookbook, Miriam Backes]

Many of Man Ray’s pictures of women have become archetypes of a certain kind of photographer’s gaze ever since: voyeuristic without being too cruel, randy without being coarse. [Financial Times]

In the syllabus for an Applied Mathematics course, students are told to write their problem sets individually. [Boston Globe]

In the veins of turtles coursed a sweet lassi that had to be drunk as soon as it spurted from their necks, because it coagulated in less than a minute. [Life of Pi, Yann Martel]

These two words not only have different meanings, but they also have different functions in the sentence. Course can be a noun, where it can refer to several concepts, or a verb, where it means to pulse or flow rapidly. Coarse is an adjective that means rough or loosely arranged. It should be easy to remember this since coarse and adjective both contain the letter A.

Do you think you need courses to get rid of the confusion caused by homophones?