As similar as they may seem, "dear vs. deer" are by no means related or connected to one another. It's essential that you are able to distinguish the different meanings of each word, in order to use them correctly. So here we are with some short and clear explanations about the confusing homophones that may drive you crazy, especially if you're not an experienced English user.

We'll discuss what "dear" and "deer" mean in a minute. But before we start, let's quickly go through a short explanation on the coincidence that appears when pronouncing "dear vs. deer". Both words sound the same because of their almost identical spellings.

This phenomenon appears because the two words are homophones, which means they have distinct meanings as well as different spellings, despite the fact that they sound exactly the same. This is also the case with other homophones such as "flour vs. flower", "hair and hare", and many others.

At its core, "dear" is an adjective. The word is used to describe someone who is liked, a person who is known and liked very much. But the same adjective can also describe something that is expensive - this is especially used as another word for "expensive" in UK English.

You may also find "dear" in the beginning of most formal letters, placed in front of the name of the person whom the letter is written for, as a polite form of addressing that person. Besides being used as a form of greeting, "dear" can also be used as exclamation that expresses disappointment or surprise.

Further, when addressing a child or someone beloved, "dear" can have the role of a noun in a phrase, used to call or speak to someone in a friendly or affectionate manner.

Example 1: She is a dear friend of mine, please behave yourself. - "dear" is an adjective describing a person that is known well and liked very much.

Example 2: I'm not even entering this shop, their products are far too dear. - "dear" can also describe expensive things. 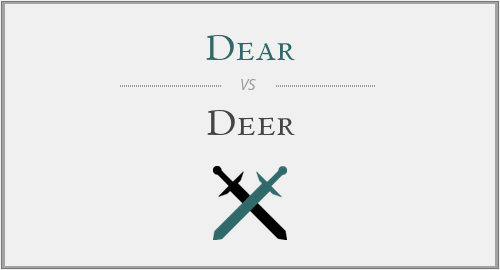 Example 3: Dear John, I am writing to you because I know we haven't talked for a long while. - "dear" is a form of addressing someone in a letter.

Example 4: Oh dear, you scared me! - "dear" can also be used as exclamation that expresses surprise.

Example 5: Yes dear, talk to me, I am listening. - "dear" may also appear as a noun, addressing someone beloved in a friendly way, usually a child.

As already mentioned above, despite sounding so similar with "dear", the word "deer" has no connection or correlation to "dear". "Deer" is always used as a noun, and it is the name of a wild animal, with antlers if it's a male, that is sometimes hunted for game or food. Think Bambi!

Example: I saw a deer in the woods. - "deer" is the name of a wild, large animal, sometimes hunted.

Make sure you don't confuse "dear" for "deer" because their meanings have no connection at all. The latter is the name of a wild animal, whereas the former is an adjective for something or someone beloved.