If you sometimes confuse the two words "delegate vs. delegation", or simply want to make sure that you've correctly understood the meanings of both words, you've come to the right place! Let's discuss what function each word has in a phrase and what concept each word defines in order to make sure that things are clear even if you are only a beginner.

Just like the similar words "dental vs. dentist" or "reward vs. rewarding", "delegate vs. delegation" is a pair of words that are included in the same word family. This means that they both refer to the same concept, but have different grammatical functions or slightly different implications in a phrase.

In this case, "delegate" can appear both as a noun and as a verb, whereas "delegation" can only function as a noun. Both words are related to the concept of sending a representative individual or group of people somewhere. But we'll explain these meanings in more detail in the next sections.

When do we use "delegate"?

"Delegate" can be used in English both as a verb and as a noun. As a noun, it defines a person or a group of people who are sent somewhere, in order to represent their organization or another, larger group of people. In general, it is used for representatives sent in a meeting, business, diplomatic trip etc. As a verb, "delegate" means giving someone else a part of the work or a part of the responsibilities, sharing the tasks and workload.

Example 1: Please meet Miss Smith, she is a delegate from the company that we'd like to become partners with and we can discuss more details with her. - "delegate", as a noun, defines a person sent to a meeting as representative staff for the organization for which they work.

Example 2: I have to delegate some of my tasks to my colleagues in order to complete the entire project before deadline. - "delegate" can also be used as a verb, meaning to give share part of the work with someone else. 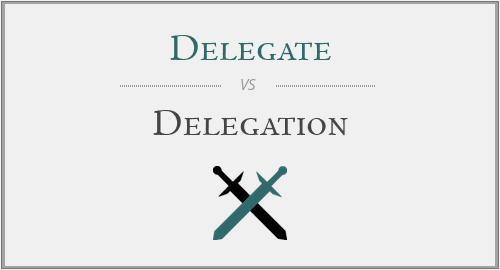 When do we use "delegation"?

This time only used as a noun, "delegate" always has the same meaning. The word defines a group of people who have been chosen to represent a much larger group of people, usually in a business trip, a negotiation table or a meeting. Sometimes though, "delegation" may also define the part of work or responsibilities that have been shared with someone else.

Example 1: The delegation will soon be here, please prepare the table for our negotiation. - "delegation" defines the group of people chosen to represent a larger group of people, usually in an official context.

Example 2: The delegation I gave to my colleagues helped me complete the project before deadline. - "delegation" may also refer to the part of work or responsibility given to someone else.

"Delegate" and "delegation" have not only very similar spellings and structures, but also define very close concepts, mainly referring to the same idea of choosing representative staff to show up in a meeting, in the name of the organization. Even so, the two words are used slightly different in phrases, according to the context, and this is where the explanations provided above will come in handy!