This Grammar.com article is about Emphasize vs. Emphasise — enjoy your reading!

Emphasis" is a usual noun, commonly chosen to express the particular meaning or importance of something. But what is the verb for this word? Is it "to emphasize" or "to emphasise"?

You might think that one of them is misspelled and the other is correct. Or you might be confused because you saw it written both ways and wondering whether they have different meanings. Let's answer these questions and make things clear, shall we?

No, none of them is misspelled. Both "emphasize" and "emphasise" exist in dictionaries and they are defined with the same meaning. Both verbs refer to the action of showing that something has a particular importance or is accorded special attention.

Now, the words are spelled differently according to the area where they are used. The UK specialists accept both "emphasize" and "emphasise" as correct forms of the verb. Americans, on the other hand, prefer the word "emphasize" and that's why you might see it spelled this way more frequently.

When do we use "emphasize"?

You can use "emphasize" whenever you want to draw attention to the special importance of something. Both UK and US accept and prefer using it, as it is closer to how the word is pronounced.

When do we use "emphasise"?

"Emphasise" is also a UK form of the same verb. The logic behind this spelling is that it has its origins in the noun "emphasis", which ends in "s". So when creating the verb, you can keep the "s". This is a less frequently used form, anyway, though it will not be considered wrong by specialists.

If you want to make sure everybody gets your message right and if you don't want to create confusion or debates with your text, you should spell "emphasize" with a "z" just in case. Yet, if you personally prefer it "emphasise", nobody should criticize your grammar because it is perfectly accepted by notorious dictionaries and has the exact same meaning as "emphasize": highlighting something. 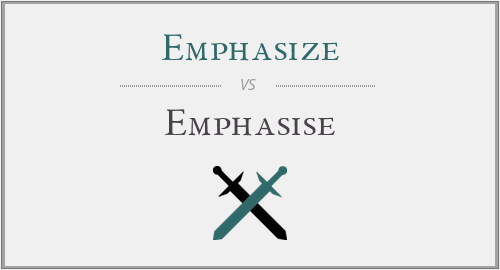