This Grammar.com article is about Entitled vs. Titled — enjoy your reading!

Sometimes, using the right expression for your message can be difficult, especially if there are more similar words referring to the same thing. But the solution to these confusions is simple: you have to understand what each word represents and in which context it should be used.

If using “entitled” and “titled” is often confusing for you, or if you believe they have identical meanings, then this article will definitely be helpful for you. Let’s take a look to these similar words!

“Entitled” is a regular verb, in its past simple form, referring to the action of giving somebody the right to do something or giving a particular title to a book, a movie or something similar.

Even though “titled”, at a first sight, might seem to represent the same as “entitled”, and might look like a good synonym, this word is actually used in a different context. “Titled” is not a verb, but an adjective, and it is used to describe the title of a person with a superior social position.

When do we use “entitled”?

Example 1: He thinks he is entitled to superior standards of living, after he did for humanity. – “entitled” is used to define someone’s right to something
Example 2: The writer entitled her book “Feelings”. – referring to the action of giving a title to a book.

When do we use “titled”?

“Titled” should not be used as a verb, as “entitled”. You must think about “titled” only as an adjective, referring to a person’s title, defining his/her social position.
Example: He was a titled man – people called him “Lord” and everyone respected his decisions. – “titled” is an adjective defining the title people have for their position in society. 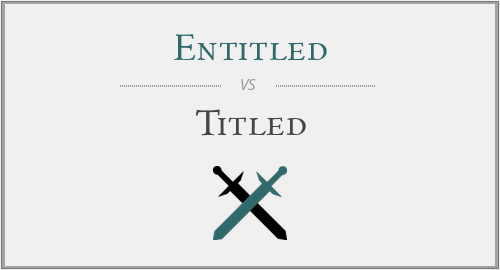