This Grammar.com article is about Envelop vs. Envelope — enjoy your reading!

He tore open the envelope as he was enveloped in anguish.

Does the above sentence make sense to you? It includes two homophones envelop and envelope which are both related but their meanings are slightly different from each other. Envelope is a wrapping paper for a letter whereas envelop is when something engulfs you completely.

In the above sentence, the subject tore the protective paper covering of the letter because he was feeling anguished and tormented and was looking for answers (maybe).

This article will throw light on the correct meanings and usage of both the words, envelop and envelope so you don’t confuse them in your assignment next time.

Envelop originated from late Middle English (formerly also as invelop(e)), from Old French envoluper, from en- ‘in’ + a second element (also found in develop) of unknown origin. Envelope originated in mid-16th century (in the sense ‘wrapper, enveloping layer’; originally as envelope) from French enveloppe, from envelopper ‘envelop’. The sense ‘covering of a letter’ dates from the early 18th century.

Envelop is used as a verb in English language where it means to wrap up, cover, or surround completely. A figure enveloped in a black cloak was hovering in the sky. It has synonyms like surround, cover, enfold, enwrap, blanket, swathe, swaddle, wrap up or engulf etc. Another sense in which envelop is used is when troops surround an enemy force from all sides.

Their assignment was to envelop the head of the enemy column and destroy it.

Envelope with an e at the end is only used as a noun in English language where it implies the meaning of a flat paper container with a sealable flap, used to enclose a letter or document. The letter was placed in a fancy envelope. Another similar meaning of envelope is a covering or containing structure or layer.

The external envelope of the swimming pool.

The outer metal or glass housing of a vacuum tube, electric light, etc. is also referred as envelope. Envelope is also defined as the structure within a balloon or non-rigid airship containing the gas.

The switch itself is a glass envelope filled with rare gases and containing two contacts. 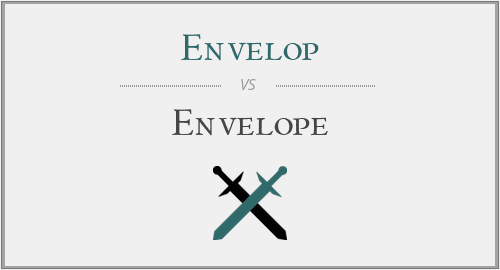 In electronics, a curve joining the successive peaks of a modulated wave is an envelope. On the contrary, in mathematics, a curve or surface tangent to each of a family of curves or surfaces is called an envelope. However, in microbiology, a membrane which forms the outer layer of certain viruses is its envelope.

Some viruses are surrounded by protective lipid and protein envelopes.

The shimmering zinc scales that envelop it echo the greasy grey skies above and the silver stretch of now quiet water. (Financial Times)

Her envelope had hearts where the o‘s in my name should have been and I tore it open and read her letter right there in the sun. (Excerpted in NPR)

After the tour, we decided to start our one-mile climb up the mountain despite the heavy mist enveloping everything. (Washington Post)

Yes, look twice, and your iPad case could do double-duty as a chic envelope-style bag. (Vancouver Sun)

When the downpour ends, thick and eerily swirling low cloud envelops me. [The Australian]

Mitchell believes balcony gardening is all about being realistic about what you can achieve – but then pushing at the seed envelope. (Telegraph)

A protective, flat, usually rectangular container for a letter, thin package, etc. is an envelope whereas when something (tangible or nontangible) enclose or enfold completely with or as if with a covering, it is envelop. Remember that the letter covering envelope has an e at the end just as email has an e at its start.