This Grammar.com article is about Fawn vs. Faun — enjoy your reading!

Homophones, literally "same sound" are usually defined as words that share the same pronunciation, regardless of how they are spelled. The similarity in the sounds of the homophones gives rise to an upsurge of misconception and confusion among the young English learners and writers. They confuse one homophone for the other in their writings which changes the whole context of the sentence resulting in further confusion.

The pair of homophones chosen for today is fawn and faun. They are both pronounced exactly alike as fa-on but their meanings are entirely different. This article will discuss the meanings, usage and differences between the two words along with some examples so you never confuse one fawn for another again.

Faun is used as a proper noun in English language where is represents one of a class of lustful rural gods, represented as a man with a goat's horns, ears, legs, and tail. It is a mythological half human–half goat manifestation of forest and animal spirits that would help or hinder humans at whim. They are often associated with the satyrs of Greek mythology.

Fawn with a w is also used as a noun in English language but its meaning is very different. It means a young deer in its first year. 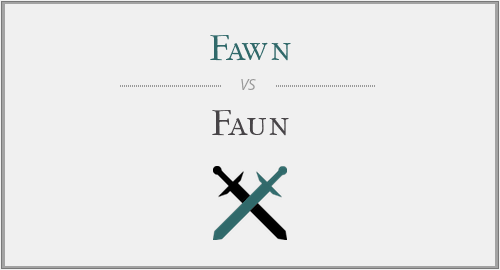 She was wearing soft shades of pale green and fawn.

Fawn is also used as a verb in English language which has a few meanings. Fawn is used to describe the birth or production of a young deer.

The forest was closed for hunting when the does were fawning.

When a person seeks favor or attention by flattery and obsequious behavior, he/she is fawning. The act of exhibiting affection or attempt to please, as a dog does by wagging its tail, whining, or cringing, is also known as fawning.

The dog fawned at its owner.

A faun is a rural god taking the form of a man with goat ears, horns, tail, and legs. The word comes from Latin, and the word and the deity are thought to descend from the Greek Pan, also a goat like half-human god. In early English use, the word was sometimes spelled fawn, but the modern spelling has been settled for many centuries. Fawn is the term for the young of several animal species, including deer. The word also works as a verb meaning to flatter or show obsequious attention (usually with over). Fawn, its two main senses having separate French and Latin origins, is etymologically unrelated to faun.