This Grammar.com article is about Fiber vs. Fibre — enjoy your reading!

Every fiber of her body was throbbing with pain after the crash.

Pay attention to the word fiber in the above sentence and think about it. Do you believe that fiber used here must have different spellings; fibre, instead? If you do not have any problem with the spellings than the rest of the article is extra information to brag about in your social group but if the spellings bother you to the core than this article is a must read for you.

The word fiber originated from late Middle English (in the sense ‘lobe of the liver’, (plural) ‘entrails’): via French from Latin fibra ‘fibre, filament, entrails’.

Fiber is used as a noun in English language where it means a thread or filament from which a vegetable tissue, mineral substance, or textile is formed.

A substance formed of different fibers attached together is also called a fiber.

Fiber is also a a thread-like structure forming part of the muscular, nervous, connective, or other tissue in the human or animal body.

There were degenerative changes in muscle fibers.

The strength of one’s character is also sometimes referred to as fiber; moral fiber. 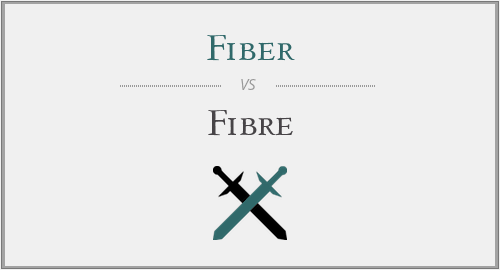 Sam is a weak person with no moral fiber.

Another sense in which fiber is used is as a dietary material containing substances such as cellulose, lignin, and pectin, that are resistant to the action of digestive enzymes.

Lack of fiber in his diet was the main cause of his chronic constipation.

Fiber and fibre are both different spellings of the same word defined above. Both spellings are many centuries old, and neither spelling was clearly prevalent on either side of the Atlantic until the second half of the 18th century. This was a period in which many British educators began to consider it proper for English words of French and Latin origin to take their more French and Latin forms rather than their more Anglicized forms. Fibre is the French spelling of the word from which the English word is derived, so it was promoted as the standard spelling despite its being unphonetic. The belief that French and Latin should hold sway over English never had much traction in the post-independence United States, and while Americans also favored the French spelling through the 19th century, the more phonetic fiber steadily gained ground through that century until becoming the preferred form around 1910.

You belong to America, practice American English or are writing for an audience residing in United States of America.

You belong to Europe or its proximal countries where English is spoken, practice British English or are writing for British or European audience.

Both spellings are acceptable and replaceable but be consistent in the spellings in a single article or essay.