In this Grammar.com article you will learn the differences between Fulfil and Fulfill.

Say you were asked to make a sentence with expectation and you wrote this:

Getting an A on the test did not fulfil her expectations

While proofreading it, did you pause at fulfil and wondered if these are the right spellings for it? Well, if you did we don’t blame you because fulfil can also be written as fulfill. Now which spellings are correct? We’ll answer that question later but first you need to know about the correct meaning of the word so you can make better sentences in the future.

To achieve or realize one ambition or goals is known as fulfil. Also the completion of a task is called fulfil. Fulfil can also be described as carrying out one’s duties in the required and expected manner or satisfy the needs of someone or something.

He could not fulfil his goal to make the company successful in one year.
The goods must fulfil three basic conditions.

Note that in the first example, fulfil implies the meaning of achieving one’s ambition while in the second one, it implies the other meaning i.e. satisfy the needs of something.

Fulfil is one of the few words that have different spellings depending on the part of the world it is used in. So the two spellings; fulfil and fulfill, are both correct as we speak. The story behind this distinction in spellings used by different people from different areas dates back to the 18th century when American’s decided that they need to separate themselves from the rest of the English speaking world.

Fulfil is a combination of two English words, full and fill, and the first pair of ls was reduced to a single l to curb the surliness of ‘llell’. The American English transition had a rule to preserve the "base" word as much as possible, which is why skill/_skilful in British English became skill/_skillful_ in American English. Also, the Americans try to cut down the unnecessary letters in a word to make it shorter, but in the case of fulfil, Americans gave up on the second rule to preserve the base word. 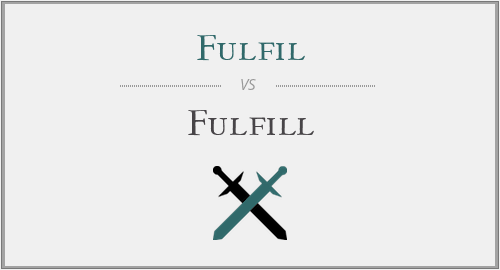 Fulfil with a single l at the end is used in British English and is the original combination of full and fill. According to the British and the rest of the world, while writing fulfill you should always finish it with only one l.

Pictures of the huge distribution centre, in Peterborough, show staff racing to fulfil orders amongst miles of shelves packed with thousands of different products. (The Sun)

The Americans think differently and believe that it is very important to preserve the original word fulfill so they end fulfill with two ls. All the American writings and literature makes use of fulfill and has abandoned the common rule of shortening a word whenever possible as in canceled, honor and humor etc.

In what’s expected to be Watson’s final game at Death Valley, the Tigers junior will look to fulfill his youthful promise to “never lose to the Gamecocks.” (USA Today)

Any spellings of fulfil can be used in its participle fulfilment/fulfillment but other participles like fulfilling, fulfilled, and fulfiller retain the double l from the root word regardless of the dialect.

Fulfillment centers are giant warehouses that help online retailers store and ship products and handle returns quickly. (NASDAC)
But critics say it’s not as simple as that, they claim in many cases people are being shunted onto other benefits unfairly and the result isn’t fulfilment but hardship. (BBC)

Next time you have to use the word fulfil in any of your writings make sure you consider your origin, audience and preference before writing it. If you are an American, then you should write two ls at the end of fulfill however if you belong to some other part of the world you should just finish it off with a single l. But make sure you remember not to consider your preference and origin while writing the participles like fulfilling, fulfilled, and fulfiller because they will always be written with two ls.

We hope that this article fulfilled all your requirements about fulfil.