This Grammar.com article is about Lead vs. Led — enjoy your reading!

Lead” and “led” vary through only one letter, when it comes to their spellings. This makes them sound very similarly and encourages some English users to believe that they can replace them without any rule, that they are synonyms or that they refer to the same thing. Which is, obviously, wrong, because “lead” and “led” are actually used in different contexts.

Yes, they usually refer to the same aspects, but there are some important differences to notice between them and they will surely be misspelled and confusing if used one instead of the other. Check all these aspects below to prevent yourself from using “lead” and “led” wrongly.

“Lead” is extremely complex. Dictionaries dedicate one, even two entire columns, to explain the different meanings and uses of this word. Mainly a verb, the word can also function as a noun with two completely different meanings, and as an adjective. All of these have their specific explanations and meanings, each required by a different context.

“Led”, on the other hand, is the exact opposite of the complexity of “lead”. In this form, it is only used as the past participle of the verb “lead”, and it can also appear written in capital letters, as “LED”, referring to something else. Let’s detail all these below.

Let’s take it slowly and start with “lead” as a verb. Mainly, it defines the action of showing someone the path or direction to walk on, usually by walking in front of them. Secondly, it can refer to winning a game, to being the best at something or, ultimately, to controlling something or someone. As a noun, “lead” defines the winning position in a race or competition, the main role in a movie, the UK synonym for the US “leash”, the UK synonym for the US “cord” or, eventually, some information police are trying to solve about a crime. Also as a noun, “lead” can define the black part inside of the pencil or the soft, grey and heavy material used for roofs or pipes. And lastly, as an adjective, “lead” is always used before a noun and describes a person that has the main role in a performance.

Example 1: Please lead the way, because I really don’t know how to get to the top of this building. – “lead” can define the action of showing the path.

Example 2: I will lead the game by 10 points and you won’t be able to defeat me. – “lead” can also define the action of winning a game.

Example 3: They think they lead the world in piano playing skills, but of course they don’t. – “lead” can be used when referring to being the best at doing something.

Example 4: Please allow me to lead this discussion. – “lead” can also refer to controlling something, whether it’s a business, a group of people, a country or a situation.

Example 5: His mother was always in the lead of the gardening competitions. – “lead”, as a noun, can define the winning position in a competition.

Example 6: Playing the lead in two very popular movies made her famous. – “lead” can also define the main role in a movie.

Example 7: Please use the lead when taking your dog out, that’s the best way to make sure it doesn’t run a way. – “lead” can be used as the British synonym for the US “leash”.

Example 8: I connected the lead to electricity. – “lead” can be the UK word for the US “cord”, the piece of wire that connects a piece of electrical equipment to the electricity supply.

Example 9: Police were chasing up a new lead. – “lead” can refer to the information police is trying to solve, regarding a crime.

Example 10: You have to sharpen a pencil to see its lead. – “lead” can define the black part inside of a pencil.

Example 11: The lead pipe looked great. – “lead” can also be a heavy material used in constructions, at pipes and roofs.

Example 12: The lead actress in that movie is also my favorite. – nonetheless, as an adjective, “lead” describes the person who has the main role in a performance.

With “led”, things are a lot easier. “Led” is defined as mostly used as the past participle form for the verb “lead”. Secondly, written with capital letters, as “LED”, the word stands for the abbreviation of “Light Emitting Diode”, which is an electrical component that emits a bright light around a small bulb.

Example 1: He led the way to success for us! – “led” is used as the past participle form for the verb “lead” and, therefore, can be used with every meaning of the verb (exemplified and explained above).

Example 2: I bought a new LED & LCD TV. – “LED” stands for the abbreviation of “Light Emitting Diode”, related to light and electricity and having nothing to do with “lead” or “led”.

As you can understand from all the explanations provided above, things are very complex with “lead” and “led”, so it’s mandatory that you remember at least what “led” means before using it in a sentence, to make sure you never confuse it for “lead”. But, if you ever doubt, just to make sure, take a look again upon the examples we provided on Grammar.com to avoid misspelling or using these words wrongly. 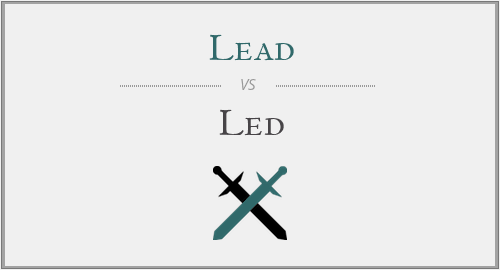