This Grammar.com article is about Lens vs. Lense — enjoy your reading!

Lens” and “lense” represent a pair of two controverted English words, because of their spellings and forms. As the English language has probably got you used, there are so many paronyms and words looking almost identical, spelled and sounding extremely similarly, but still referring to so different concepts, that you are probably expecting that “lens” and “lense” carry different meanings which you have to remember in order to use them correctly and avoid future confusions.

As “lens” and “lense” are frequently causing doubts even for experienced English users, we prepared this article with the objective of establishing once and forever if these forms are correct or not and in which context they should be correctly used. Check the explanations below to make sure you get a clear understanding upon this matter.

So, what’s the deal, with “lens” and “lense”? Is it true that both forms are correct? Well, shortly, no. But let’s get deeper into this matter. Which is the wrong word, which is the correct one, and how did they even get to this dilemma? Actually, it’s a simple doubt regarding plural and singular forms. “Lens” looks like a plural form; so does this mean that the singular form is “len”? But “len” doesn’t exist in English, so it couldn’t be. Does this mean that “lense” is the correct word”? It looks like a noun in singular, so this means that the plural form would be “lenses”. See? This is exactly how the doubt was created. We’ll sort everything out in a minute.

Once and for all, “lense” does not exist. “Lenses” is the plural form for “lens”, because this is the form of the noun in singular. It is obvious that due to the spelling in the plural form, people may assume that “lense” is the spelling for singular, but you should remember it’s not. Some might claim that both spellings are accepted, but after checking few of the most important English dictionaries, we can assure you that they are not. “Lense” is nothing else but a misspelling, this is the only thing you should remember about “lens” and “lense” in order to always use them correctly from now on.

“Lens” is the noun that appears in all dictionaries, spelled this way in its singular form. It defines the curved piece of glass, usually round shaped, used to look at things through glasses, cameras or various scientific equipment.

This is the one and only correct spelling, and it’s spelled “lenses” in plural.

Example: I need to buy a new model of lens for my glasses, according to my ophthalmologist’s recommendation. – “lens” refers to a piece of glass used to look at things through glasses.

Never! “Lense” is simply a misspelling of “lens”, appeared because of the confusion we discussed above. You should never use “lense” in any message or expression, because this word does not exist in any notorious English language dictionary and is always considered a wrong spelling.

In the end, you have to remember a very simple and short conclusion: “lense” is a misspelling, “lens” is the only correct form of the noun in singular, referring to a round shaped piece of glass used to look at something more clearly. You should doubt no more about these two similar spellings! 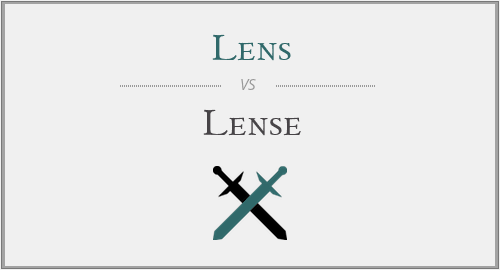