This Grammar.com article is about Licence vs. License — enjoy your reading!

Do you have a license acclaiming you to use this machine?

Are the above sentences right? Do you think that one of the sentence should have license with different spellings? Well, yes and no! The difference between the two spellings of license is very similar to practice and practise that once you've learned the difference for one, you instantly know it for the other!

License and licence are two words with exactly same sounds and meanings hence, they are called homophones. The words are used in different contexts though; one as verb and one as a noun. But this difference is common in a few countries of the world while the rest of them use the same license as a noun and a verb. This article will shade the meanings, usage, examples and differences between the two homophones so, keep reading!

The word licence is used as a noun in English language where it means a permit from an authority to own or use something, do a particular thing, or carry on a trade (especially in alcoholic drink).

A subsidiary company manufactured cranes under licence from a Norwegian firm.

Licence is also used to imply freedom to behave as one wishes, especially in a way which results in excessive or unacceptable behavior.

The government was criticized for giving the army too much licence.

A reason or excuse to do something unacceptable is also called a licence.

Police say that the lenient sentence is a licence to assault.

License with s is used as a verb in most countries where it means grant a licence to.

A pub has to be licensed by the local justices. 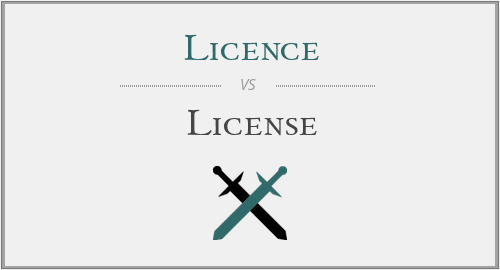 License is also used to imply the meaning of authorizing the use, performance, or release of (something).

The company expect that the drug will soon be licensed for use in the USA.

An old and dated meaning of the verb is also to permit (someone) to do something.

He was licensed to do no more than send a message.

In American English, license is both a noun and a verb, and licence isn’t used. For example, one who is licensed to drive has a driver’s license. In all the other main varieties of English, licence is the noun, and license is the verb. So, for instance, one who is licensed to perform dental surgery has a dental surgeon’s licence.

Egypt said the American-backed pro-democracy groups were not licensed and were illegally funded. [Los Angeles Times]

A pub where a man was shot in the legs last weekend has had its licence suspended by Knowsley Council. [BBC]

Fleet separation means that only those who fish can own a licence.  [Globe and Mail]

Fears that young drivers in Marton and Taihape will drive without licences because of a lack of testing facilities in their towns are unfounded.  [Manawatu Standard]