This Grammar.com article is about Lose vs. Loss — enjoy your reading!

Lose and loss are a pair of words that have somewhat similar meanings which cause the most people to confuse them and use them in each other’s place.

Today I will discuss the meanings and usage of both these words with examples so learners of English language can understand the real difference between them and use them accordingly.

The word loss is used as a noun which means the fact or process of losing something or someone.

We are avoiding loss of time.

Lose is word that is the verb in the sentence. It has the meaning of meaning of being robbed of something and something that no longer exists.

I've lost my appetite due to stress.

The word loss also means to become unable to find (something or someone).
Lose vs. Loss

To fail to win (a game or contest) is also known as lose.

In Super bowl 2020, 49ers lost the game by 11 scores.
The flood is the reason why hundreds of people lost their homes and had to move upstate.
The scandal caused the professor to lose his repute in his career.

So lose and loss are two words that have somewhat similar meanings but one must remember that these are the words that actually need more focus while writing. Lose is used as a verb which indicates the action of losing something whereas loss is a noun which represents something that is lost.

Remember that lose and lost are not interchangeable. 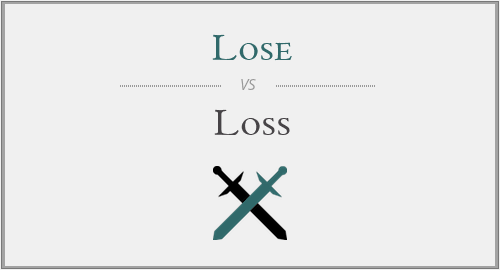