This Grammar.com article is about Macro vs. Micro — enjoy your reading!

English language can be altered in various ways and one of those ways is prefixing. Prefixing refers to different units relating to several sizes. Micro and macro are both very similar words where the only difference in the two words is the relative size of measurements they are used to indicate.


With the help of this article, I will illustrate the difference between the two words, highlighting their contextual meanings. At end, I would explain a useful trick to help you utilize the both words accurately in your writing instantly.

Macro is used as a noun in computing which means a single instruction that expands automatically into a set of instructions to perform a particular task.

The word macro is used as an adjective which means something on a large-scale; overall.

The analysis of social events at the macro level was presented.

In photography, the word macro means relating to macrophotography.

Your lens has a macro setting for shooting big close-ups.

The word micro is used as a noun to describe various things like a microcomputer, a microprocessor and a very short miniskirt or mini dress.

Micro is also used as an adjective which means something that is extremely small.

They had arranged a micro buffet area.

Abbas noted that the Fund is paying more intention to Egyptian women, pointing out that the loans provided to women in the last five years amount to EGP 3bn for small and micro-enterprises. (The Daily News Egypt)

Mrs. Wade is rocking fresh micro braids and we are here for every moment of it. (USA Today) 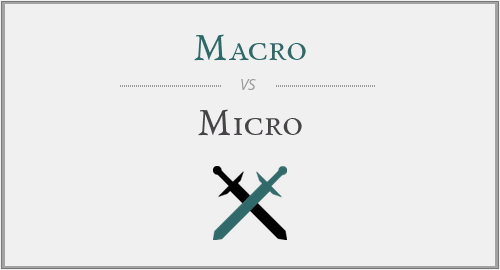