Make Do vs. Make Due

This Grammar.com article is about Make Do vs. Make Due — enjoy your reading!

When things don’t go the way we want them to, what do you do in such situations? You make do the best out of it. In medieval English language, the phrase make do had a substitute and that was the phrase of make due. However, in today’s current language, only one of them can be used accurately.

Make do can also written with a hyphen, making it one word and that is an adjective which refers to something short term and momentary.

Make-do tents are utilized for camping these days.

Make do as phrase:

Make do without the hyphen is an entirely different phrase that has a definition to accomplish or survive with the limited resources available to an individual.

Josh has to make do without the missing ingredients.

Use of Make due:

Make due was commonly used till 1940s; however, it is no longer accepted in English language and using it is considered a grammatical or spelling error.

I didn’t have a very high budget so we had to make due with cheap food on the trip.

They will have to make due without internet for a week.

The hotel’s booking system was down so, they had to make due without it.

The travelers had to make do with the little supply of water they had in the desert.

The café was out of tea so I had to make do with coffee.

Make do or make due:

In conclusion, make do is a two-word verb phrase that is acceptable in modern English of today’s world. It means to make the best use of whatever is provided in the unsuitable situation. Make due means the same however it is just an old version of the word that is no longer accepted. Remember, the word ‘do’ in make do is a verb which relates to carry out some action and so, the whole phrase ‘make do’ means to carrying out an action in bad conditions. 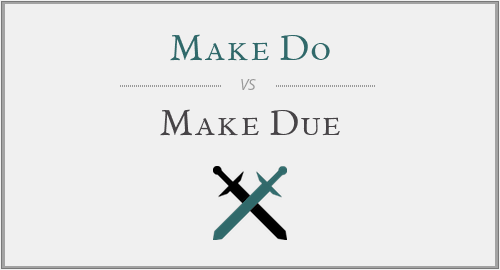