This Grammar.com article is about Manner vs. Manor — enjoy your reading!

The words manner and manor are homophones: they sound alike but have different meanings. Consider the sentences below:

Nate's grandfather has an odd manner of laughing.

The manor is now a popular tourist site.

Do you think these sentences are right? Lets see.

The word manner originated from Middle English: from Old French maniere, based on Latin manuarius ‘of the hand’, from manus ‘hand’.

A way in which a thing is done or happens is called manner.

Taking notes in an unobtrusive manner.

Manner is also a person's outward bearing or way of behaving towards others.

His arrogance and pompous manner.

Didn't your mother teach you any manners?

A large country house with lands is called manor. 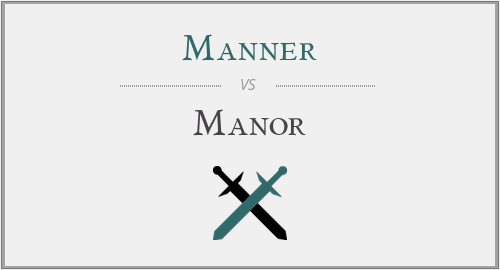 A Tudor manor house in the English countryside.

The district covered by a police station is also called a manor.

They were the undisputed rulers of their manor.

Second, the plan was rejected in the most democratic manner possible – through a referendum. [Guardian]

Shaunie, as Bruce calls him, has a manner that’s both friendly and immediate. [The Age]

What manner of man is this, or what manner of creature, is it in the semblance of man? [Dracula, Bram Stoker]

He didn’t do himself many favours being seen riding with his local fox hunt like a latterday lord of the manor. [Independent]

Baltic landlords, who remained overwhelmingly German, were often absent from their estates, preferring life in the towns to the isolation of their manors. [The History of the Baltic States, Kevin O’Connor]

Lerner, who lives on an adjacent 200 acres in an elegant restored cabin, says the manor house is used once or twice a month for charitable events. [Washington Post]

A manor is a mansion or stately home. A manner is a characteristic way of doing something. These words are homophones (words that sound the same but have different meanings), so it’s easy to mix them up.

Living in a manor does not teach you manners.