This Grammar.com article is about Material vs. Materiel — enjoy your reading!

Material" is not synonym with "materiel". Yes, they are spelled similarly and yes, they can both be used as nouns, but their meanings are definitely not identical. Make sure you never say the "materiel" of your dress is silk or cotton, because the two words refer to different things.

Let's see when and how to use them so you are sure your message is correctly understood.

"Material" is a usual word, commonly used in daily English conversations. It is both a noun and an adjective and usually refers to consistency: whether it is a piece of cloth, substance, data or money.

"Materiel", anyway, has nothing in common with "material", besides the fact that it's also a noun. "Materiel" is less commonly used and it refers to a different concept, which we will explain and exemplify below. So it's essential to remember that you should never confuse "material" for "materiel".

When do we use "material"?

"Material", as a noun, is defined as substance, piece of cloth or information. It refers to something with consistency. Unlike "materiel", "material" can also be used as an adjective, describing money or other possessions such as objects or documents, not thoughts or emotions. You can use this word in any of these contexts:

Example 1: My pajamas are made out of a soft material, perfect for a comfortable sleep. - referring to a piece of cloth

Example 2: She is collecting raw material for her experiment. - referring to some type of substance

Example 3: My research is not complete yet - I need more material to make sure I understand each aspect correctly. - referring to information

When do we use "materiel"?

"Materiel" is less common in usual conversations, but its spelling is very similar to "material". This is also the reason why it is often confused for the second word. Even so, its signification is very different and will change the meaning of your message. "Materiel" defines the military shipments of equipment and weapons. It shouldn't be used with a different sense.

Example: The materiel was shipped to the war zone in only a few hours. - referring to the military equipment and supplies

"Material" is often confused for "materiel" due to their spelling similarity. But you should remember that the first one is both more complex and more usual, having multiple meanings as an adjective and noun as well, whereas the second is simply referring to military equipment. 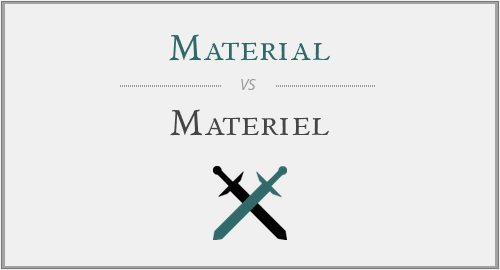