This Grammar.com article is about Math vs. Maths — enjoy your reading!

If you ever got into contact with the word "mathematics", you have certainly also seen at least one of the nouns from the pair "math" and "maths". But which one is correct? How do you spell it shortly, "math" or "maths"? Let's take a quick look upon this linguistic confusion to make sure you get it right.

Both "math" and "maths" are abbreviations for the word "mathematics", the complex science that studies numbers and shapes. We can't claim that any of these abbreviated forms is right or wrong, because they are just shorter versions for the full noun ("mathematics"). Whether you prefer adding the last "s" or not is a matter of personal choice and culture, according to how you've been educated in school and how you have seen it spelled more frequently.

There are, anyway, some statistics that show how often "math" and "maths" are used. It turns out that, just as it happens for other pairs of words that differ through only one letter, the frequency of use regarding the different abbreviations differs from British to Americans. Here's how:

"Maths" is the abbreviation preferred by the British. In the UK, they say that "mathematics" ends in "s" and so should its short form. It's more likely that if you ask a British person, they would tell you they prefer "maths" as they have seen it spelled like this all the time.

"Math" is preferred by the Americans, not only because they usually go for the shorter forms, but also because they consider "mathematics" is a mass noun that takes singular verbs and should, therefore, be abbreviated without the "s" in the end.

"Math" and "maths" are not complete words on their own and. As abbreviations, they can't be considered wrong or right. Choosing a form will be partially influenced by your personal choice and logic, and partially by the region where you've learned to spell it. British use "maths" more often and Americans prefer "math", but this does not define any rule for correct spelling. 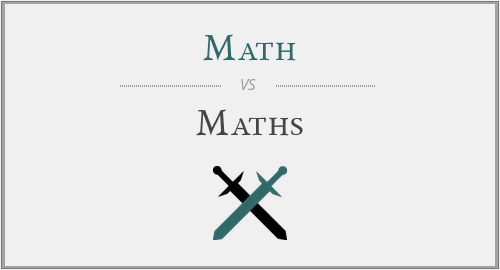