There are so many different meanings the word "miss" has, that the word itself can become an object of confusion for students of English. But besides its multiple definitions, "miss" also raises questions when compared with “missing". Why does this happen, and how should the two words "miss vs. missing" be clearly understood, is exactly what we will discuss in this article!

An important misunderstanding, in regard to the word "missing", is the false impression that it functions as a noun. That happens because some people tend to associate it with words such as "drawing" or "painting", which become nouns after adding "-ing" to the original verb. But this is not the case for "missing", which never functions as a noun, but as an adjective or verb in participle form. This is the first thing to clarify regarding this word.

As for "miss", this is a complex word that can be used both as a verb and as a noun, with several different meanings that we are going to discuss and exemplify below.

The first function of "miss" is to represent several different actions. So as verb, "miss" can refer to feeling sad about someone not seen for a long time, or feeling the need for something that is not acquired that used to be in one’s reach or possession. Secondly, it can refer to the action of not going somewhere/not attending a certain event that one had intended to attend. It can also mean not hearing or seeing somebody, or even not hitting or catching an object as intended. Last but not least, "miss" can refer to arriving too late to catch a means of transport (bus, plane, train etc.), or to not notice something or somebody.

"Miss" also has the role of a common English noun, and in this case it is used to define that moment of not catching or hitting something as intended.

And finally, "Miss" as noun can also be used as a title for a woman or a girl who is not married. In this case, "Miss" usually appears in front of the lady's family name or full name.

Example 1: I haven't seen my parents in a while and I miss them so much. - as verb, "miss" can refer to feeling sad about someone not seen for a long time.

Example 2: I miss having my own room, I really need privacy! - "miss" can also refer to feeling the need for something that is not in one’s reach or range of possibility at this point in time.

Example 3: I can't get there in time so I will most certainly miss the wedding. - "miss" may mean not attending a certain event.

Example 4: If you miss my words, don't hesitate to ask me to repeat so you can all understand what I'm saying. - "miss" can mean not hearing what someone else said.

Example 5: It’s an easy goal, but I'm sure he'll miss because he's not been professionally trained in football. - here, "miss" defines the action of not hitting an object as intended. 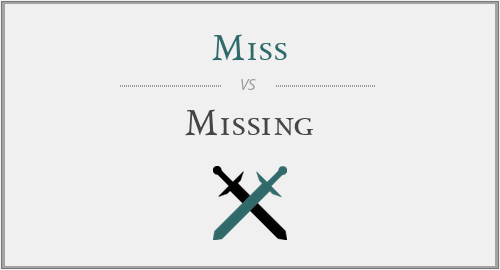 Example 6: Hurry up or you'll miss the bus! - "miss" can refer to arriving somewhere too late and not catching a means of transport.

Example 7: There is a huge sign on the door saying it's his office so there's no way you can miss it. - lastly, used as a verb, "miss" can refer to not noticing something.

Example 8: That was a hilarious miss, even though it should have been an easy goal. - "miss" is used as a noun to define the moment when something is not hit or caught as intended.

Example 9: Call Miss Smith and tell her we can meet. - "Miss" can also be used as a noun as the title used for women or girls not married yet.

When do we use "missing"?

As already explained in the beginning, "missing" is not a noun, but an adjective. So when it's not a verb in its participle form, defining all the actions that the verb "miss" defines, "missing" is always used to describe someone or something that cannot be found because it's not in its usual place. The same adjective may also be used when describing something not included in something else.

Example 1: He called her because he was missing her so much. - "missing" is the participle form of the verb "to miss".

Example 2: We need to find the missing documents. - "missing" is an adjective that describes something that is not in its usual place and, therefore, cannot be found.

Example 3: There are a couple of things missing from the list, please write them down! - "missing" may also describe something not included in something else.

Besides learning every way in which "miss" can be used and all its definitions, the only thing you need to remember in future in order to clearly distinguish "miss" from "missing" is their grammatical functions. Keep in mind that "miss" can be used with several meanings as a verb and noun, whereas "missing" can only function, when it's not the participle form of the verb "miss", as an adjective!