This Grammar.com article is about Net vs. Gross — enjoy your reading!

Gross” and “net” are complex English words. More exactly, both come with their own, unique significations, multiple meanings and uses. The words aren’t spelled similarly, so it’s quite logical and easy to distinguish them and use them correctly. But when it comes to money, both are frequently used to describe a certain amount, in different ways. People tend to confuse these ways, or the way money is measured/counted using these words, and this is why “gross” and “net” become two very controversy words in English.

If you’re not sure if you have to refer to your salary is a “gross” or “net” income, if you are not sure what each adjective describes and how to use these words correctly, we will clear out any confusion for you with the explanations provided below.

Both “gross” and “net” can function both as adjectives and verbs; plus, “net” is also used as a noun. They have multiple meanings and can be used in plenty of contexts, with various significations, but those are not for our interest now. What we’re focusing on is the actual reason for confusing “gross” and “net”, and that is how these words are used as adjectives to describe money.

As adjectives, both “gross” and “net” are used to refer to money. One is used to count an amount of income including taxes and fees, while the other doesn’t include those. People usually forget which one does and which doesn’t, and this is the main reason why “gross” and “net” are so confusing and sometimes even avoided. Check below how to use them correctly and how to remember their correct definitions.

“Gross” is the adjective that refers to a particular amount of money earned as a total, which has not had taxes or other costs applied or taken from it yet. The word can refer either to a salary, or to profit.

Example: My gross salary is quite big, but after all taxes and fees apply, I remain with almost less than a half! – “gross” refers to an amount of money that hasn’t had taxes taken away from it yet.

“Net” is the opposite of “gross”, if you want to remember it easier. The adjective is used to describe a particular amount of money/income/profit which has already had taxes, fees or other costs applied and taken away from it. It’s the actual money that an employee remains with after paying all debts and taxes.

Example: My net salary is quite satisfying now, given the small taxes that have been applied. – “net”, or “nett” in its UK form, refers to the amount of money/income/profit remaining after taxes have been applied and taken away from it.

The best way to remember which word means what, when referring to money, is probably by using a simple trick that might seem silly but does actually work. “Gross” is the longer word, it has more letters than “net”. And so is the income that these words refer to. A “gross” amount of money is the bigger one, because taxes haven’t been taken away yet, while a “net” amount of money is a smaller one (just like “net” is shorter than “gross”), because taxes have been applied and lowered down the income. Simply associate the lengths of the words to the amounts of money they refer to, for a small but efficient hint. Don’t worry, once you get used to these concepts, using “gross” and “net” will actually be easy and logical. 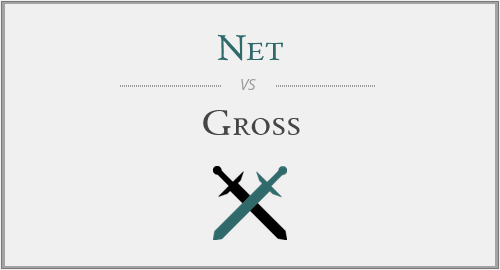